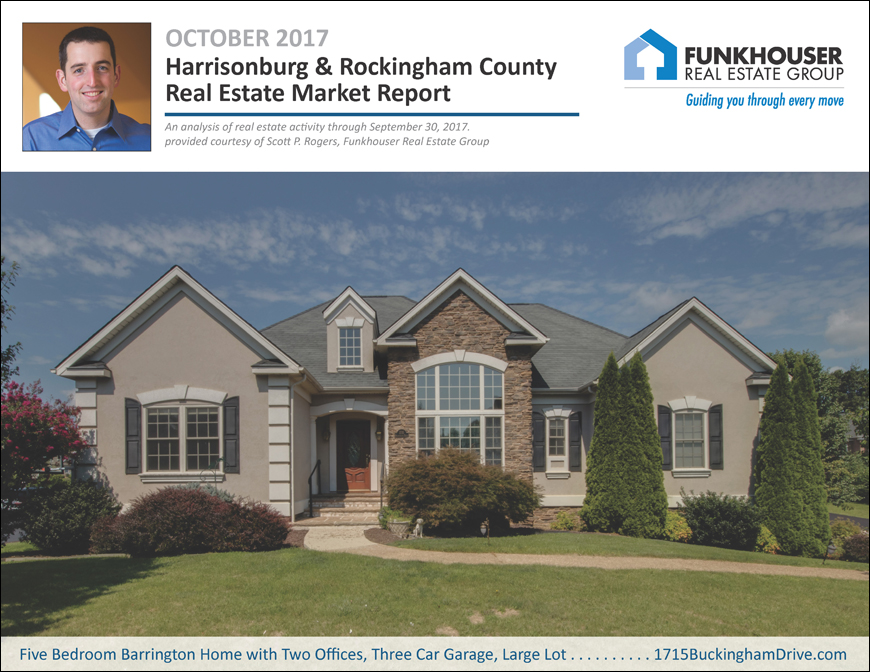 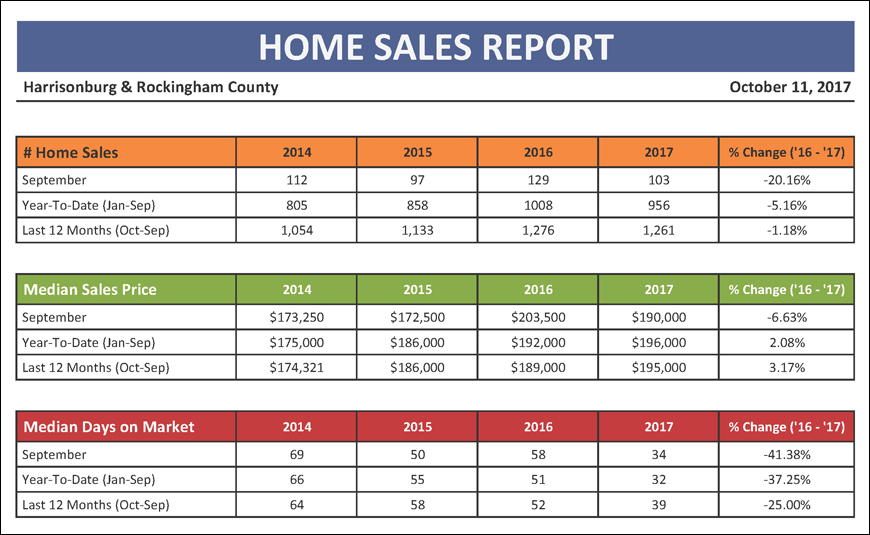 Home sales were decidedly slower this September as compared to last September, with a 20% decline from 129 home sales to 103 home sales. This adds to the year-to-date totals to show a 5% year-to-date decline in the pace of home sales in Harrisonburg and Rockingham County. Despite slowing sales, the year-to-date median sales price is up 2%, and median days on market is down 37% year-to-date. These final two statistics (median price, median DOM) suggest that there is still strong buyer demand despite fewer actual closings, and that the decline in sales may be primarily related to low inventory levels. 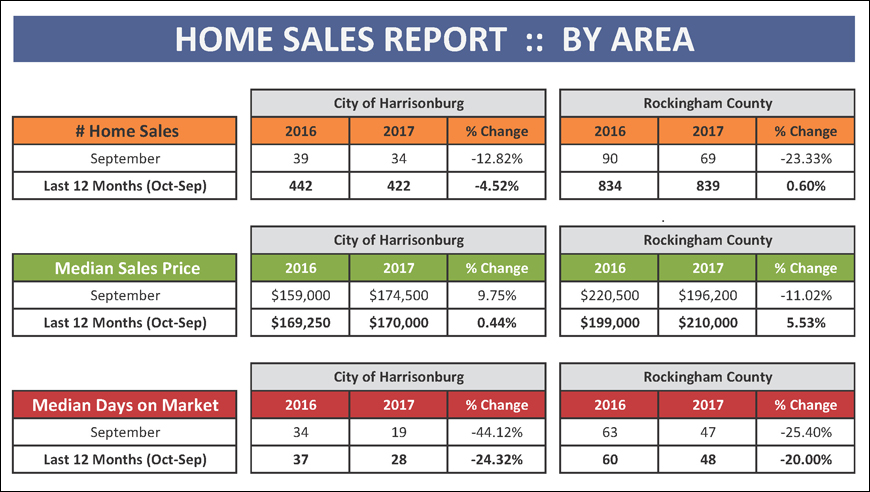 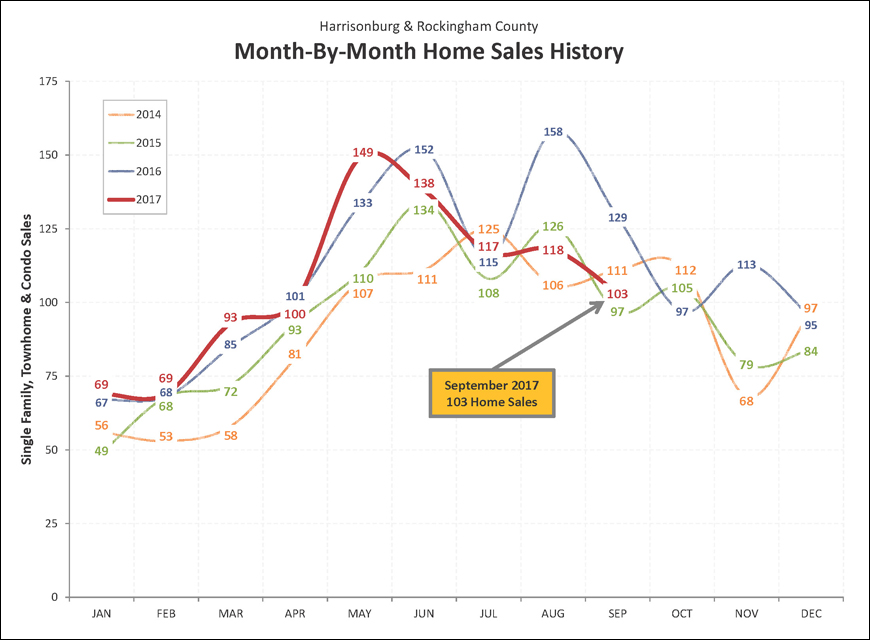 This time last year we were celebrating all time high sales figures in August and September - this year, not so much. September home sales were on the low end of what we have seen for September home sales over the past few years -- having declined 20% from 2016, though being slightly higher than 2015 home sales. Last year, home sales in October, November and December hovered between 95 and 115 home sales per month. With slower sales this August and September, it is not clear whether we’ll see quite as many sales in the final quarter of 2017. I would predict between 85 and 100 home sales per month over the next three months. 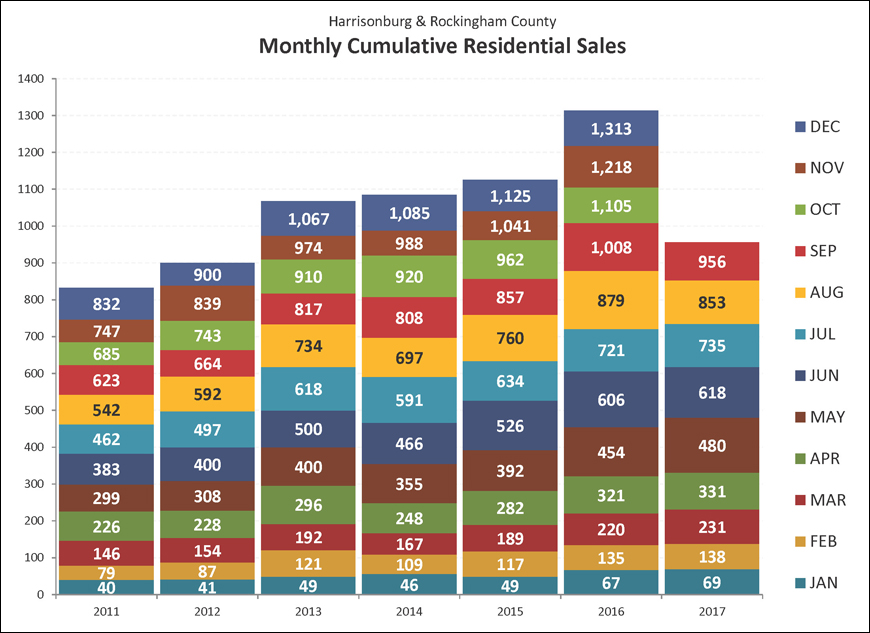 This colorful graph offers another way to look at the overall sales trends for the past few years in the Harrisonburg and Rockingham County housing market. As shown above, our local housing market experienced small incremental growth between 2013 and 2015 before seeing a sharp uptick in home sales last year in 2016. Until August, it seemed that we would see more home sales in 2017 than in 2016 -- but we have now, suddenly, fallen quite behind! Since September did not help us rebound after a slow August -- it seems nearly impossible that we will match 2016 home sales levels, though quite likely that we will exceed all other years shown. 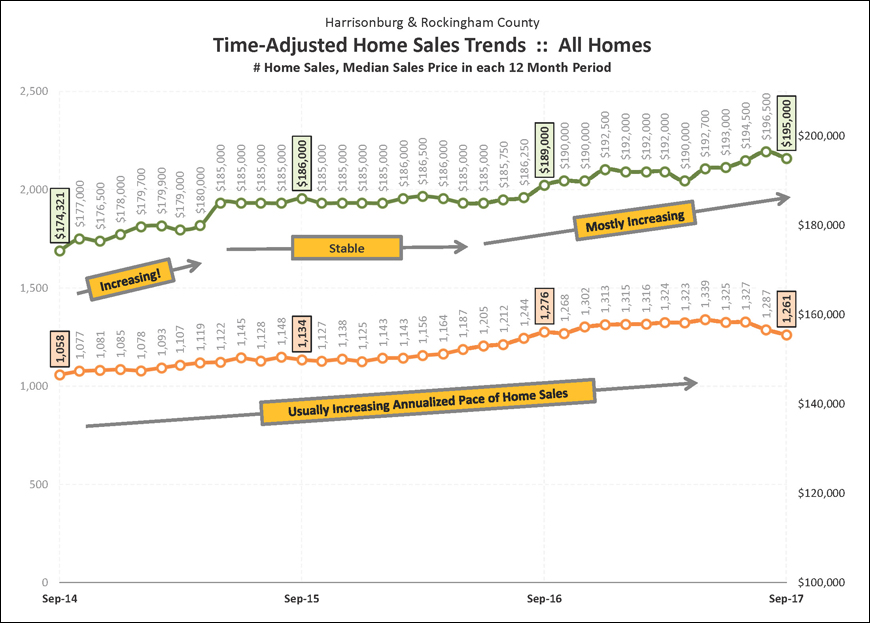 This graph shows a rolling 12 month trend line of the number of homes sold in the Harrisonburg and Rockingham County area, as well as the median price of the homes that sold during these time frames. Each data point shows one year’s worth of home sales, which eliminates the volatility of evaluating sales figures on a monthly basis. Over the past three years we have seen relatively consistent increases in the annual pace of home sales, which (until August 2017) had risen to more than 1,300 sales/year -- and the median sales price has been steadily increasing for over a year from the $185K range to now be right around $195,000. 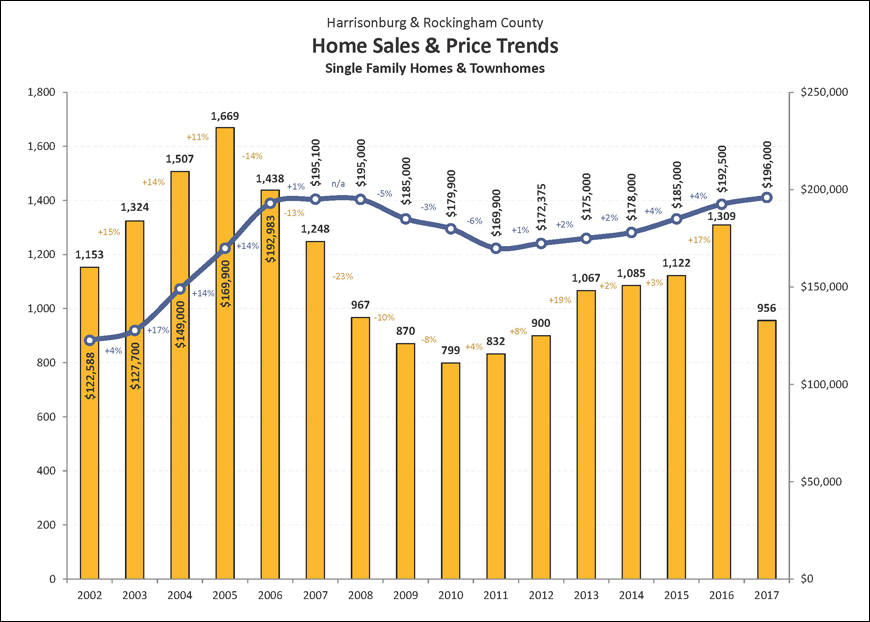 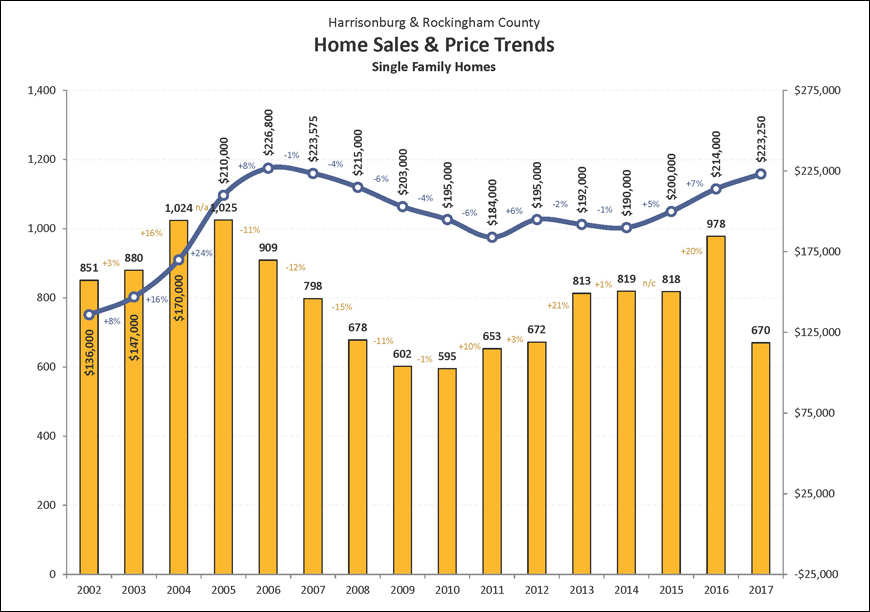 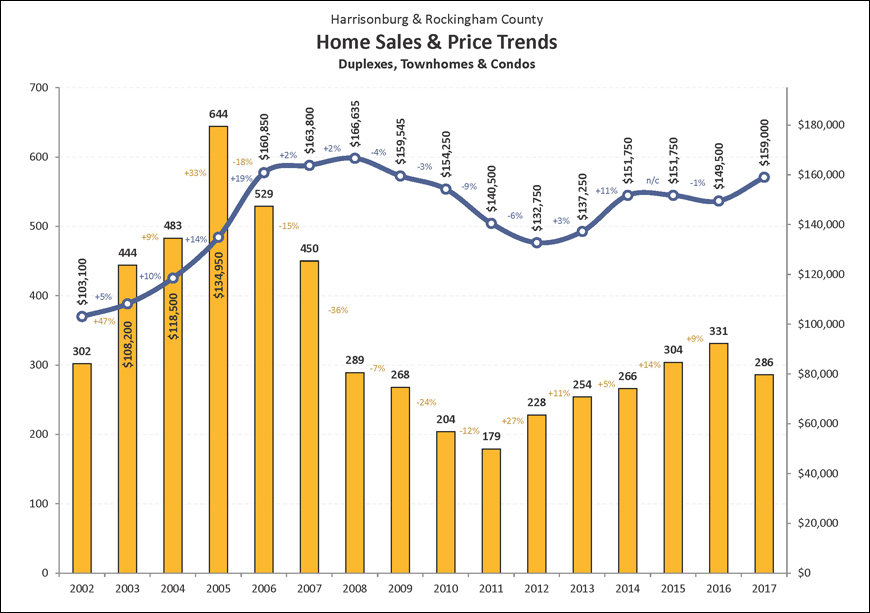 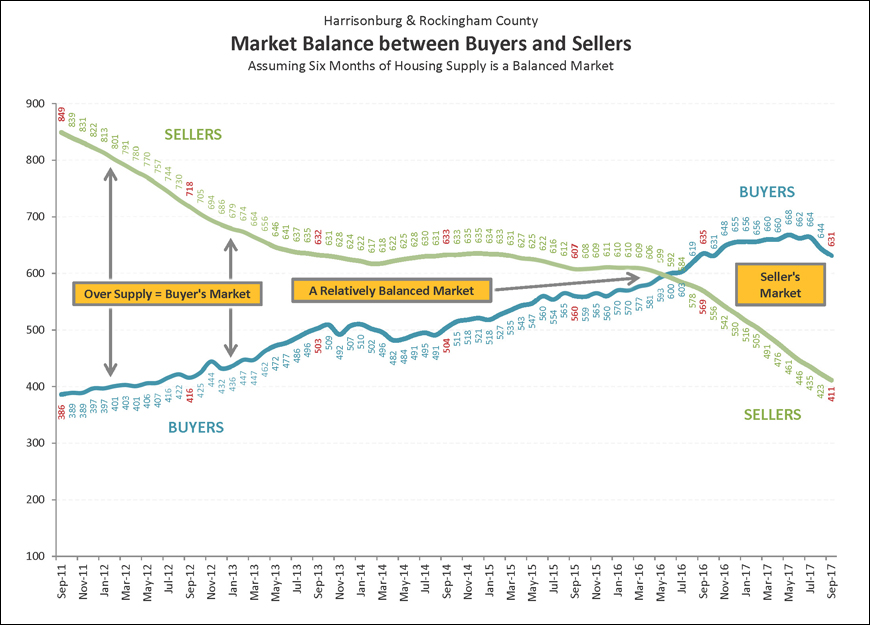 Most housing market analysts consider six months of inventory (active listings) to be an indicator of a balanced market (between buyers and sellers). The “BUYERS” trend line above is illustrating how many buyers are buying in a six month period. The “SELLERS” trend line above is illustrating how many sellers are in the market (active listings) at any given time. Over the past four years we have seen a steady increase in buyers and a declining number of sellers. In June 2016, these two trajectories crossed, and there was no turning back. There are now many more buyers buying in a six month period than there are homes for sale! 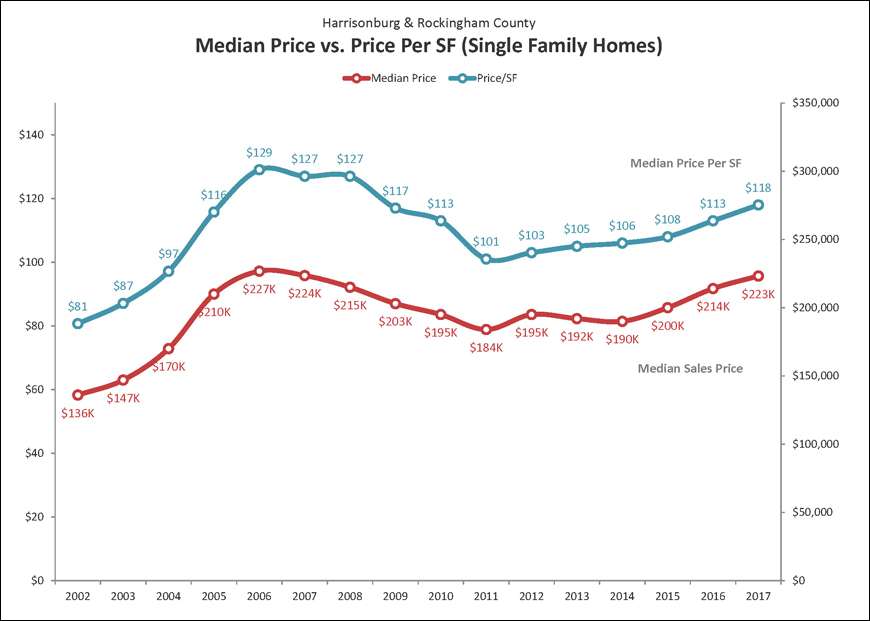 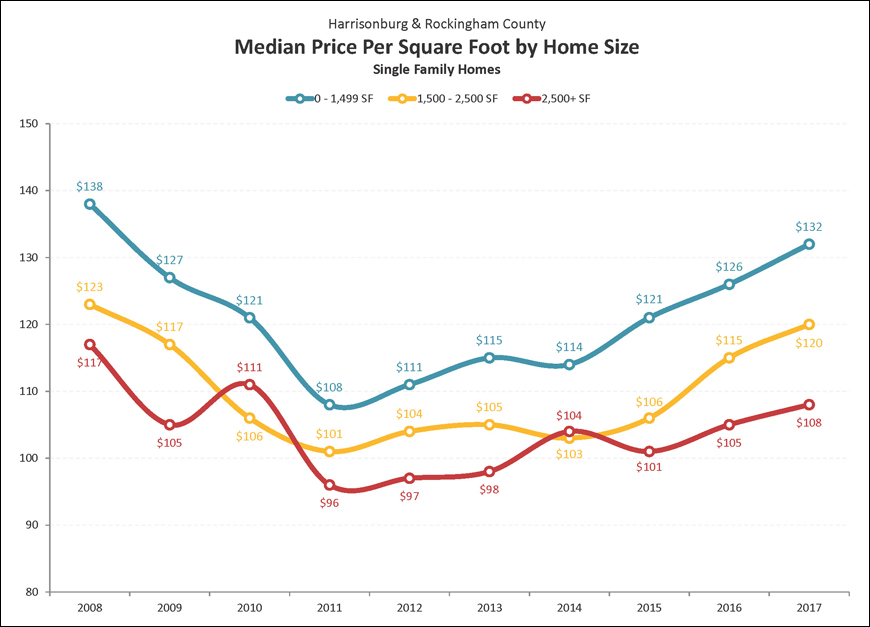 Price per square foot of single family homes certainly varies for many reasons, including the age, location, lot size and structural characteristics of each home sold. However, there are some similarities in homes of similar sizes. Looking at 2016 figures, this graph illustrates that the median price per square foot of larger homes (2500+ SF) is a good bit lower ($108/SF) than that of homes with less than 1500 SF ($132/SF). These values cannot be used as an absolute standard against which the value of any home can be measured, but they can provide some helpful guidance when trying to determine the value of a home. 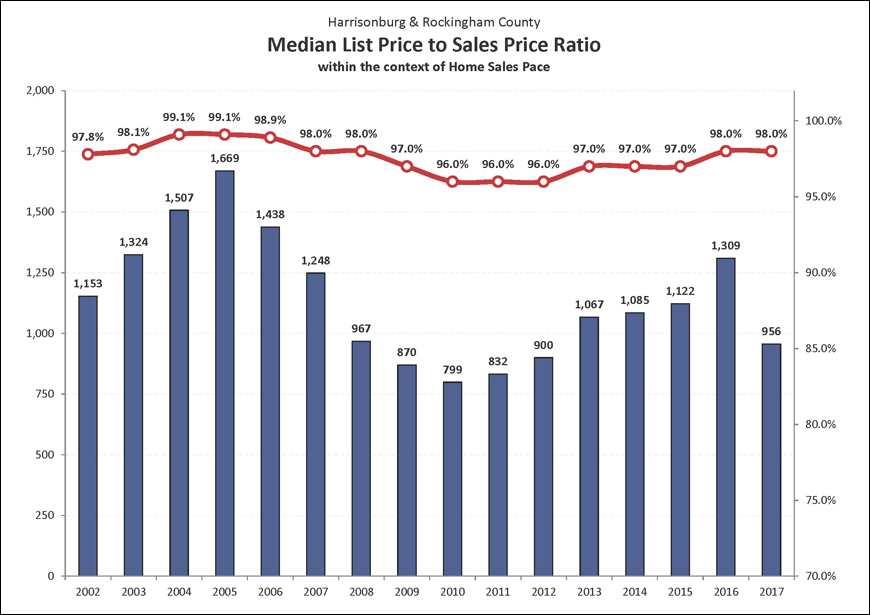 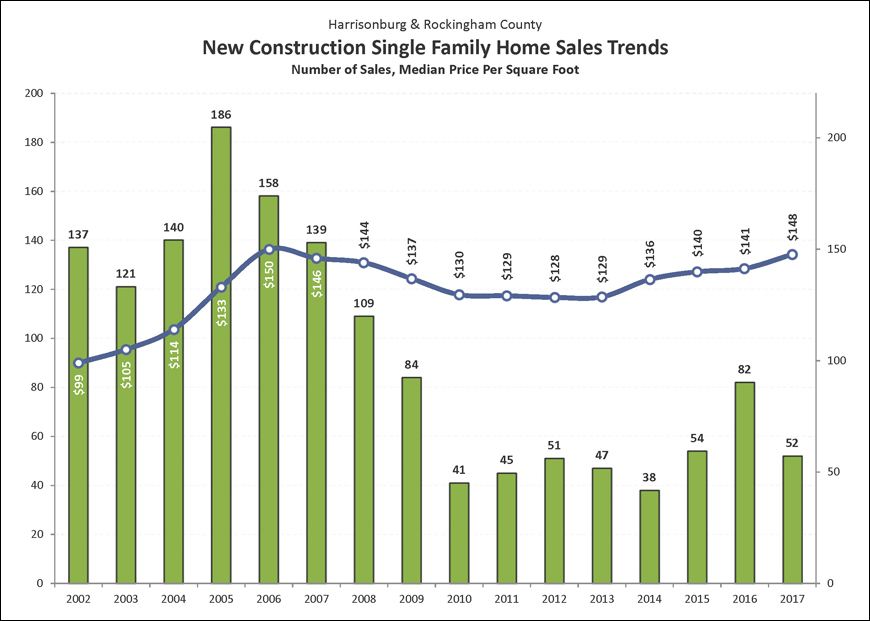 New home builders experienced a steady decline in new home sales between 2006 and 2010 -- dropping 78% from a peak of 186 to 41 sales in a year. Even if we use a starting point of 2001 (before the housing boom) we still see a 70% drop between 2001 and 2010. The number of new home sales per year has not crept up much since that time -- staying between 38 and 54 new home sales per year. This past year, however, was QUITE different. There were a total of 82 new home sales last year, exceeding the full year of sale seen for each of the past six years -- a welcome sign for new home builders! It does not seem that 2017 will match that 2016 pace. 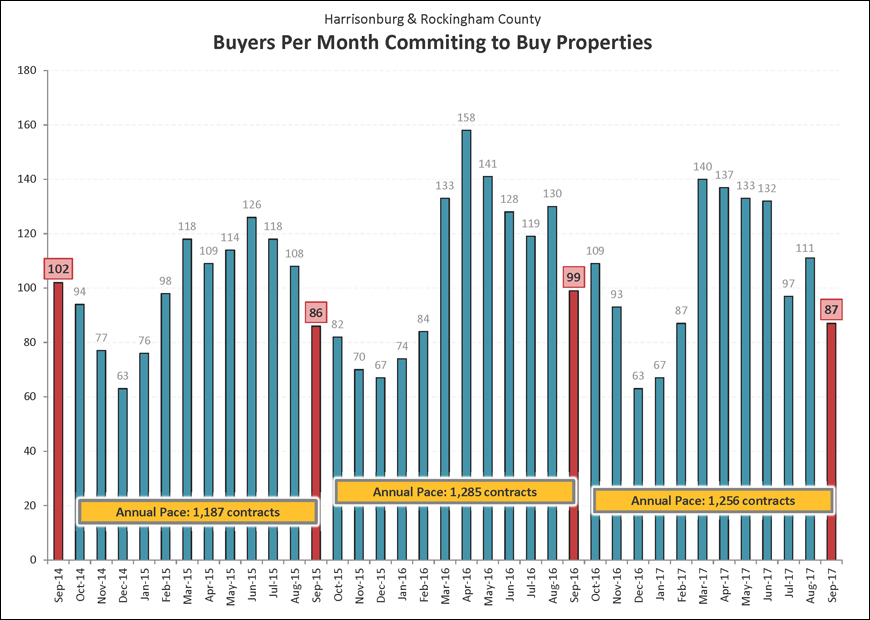 Strong contract activity is typically an indicator of strong months of sales to come. After several strong months in a row in March, April, May and June of 2017 -- contract activity fell off a good bit in July 2017 (97 compared to 119 last July) and in August (111 compared to 130 last August) and yet again in September (87 compared to 99 last September). These slower months of contracts are resulting in the slower months of closed sales we have seen in August and September. I am hopeful that we will see 80 - 95 contracts in October and November, but it is possible the pace of contract signing will slow down even further this Fall as compared to last year. 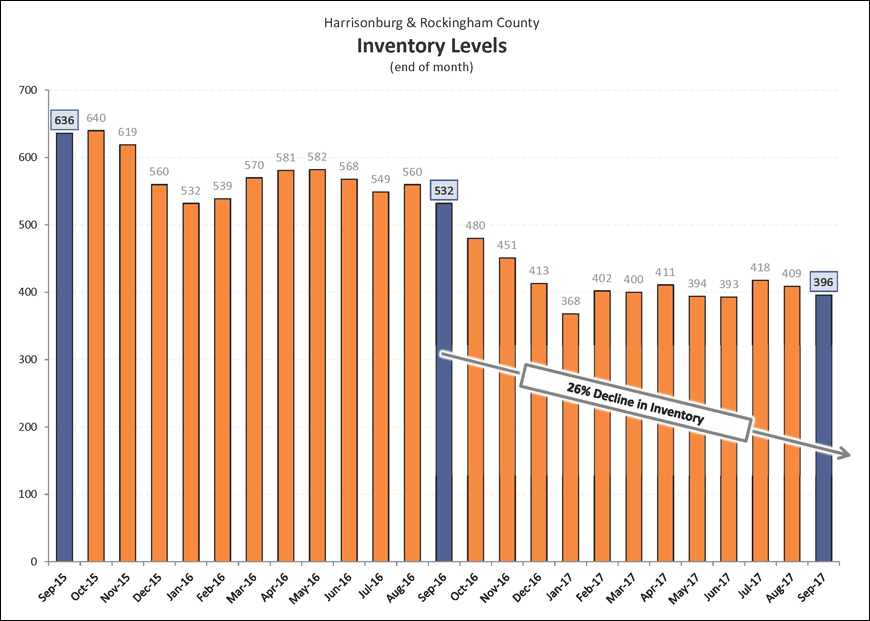 Overall sales activity is the combined effect of many would-be home buyers deciding to make an offer on a particular home -- and those decisions are not typically taken lightly. In contrast, changes in inventory levels are the effect of many homeowners deciding to list their home for sale -- which may be a significant decision, but it is not always so. Some homes that are on the market have been listed for sale by sellers who are “testing the market” and as a result, inventory levels can shift more quickly than home sales trends. Inventory levels have been declining drastically over the past year -- and are now 26% lower than they were one year ago. 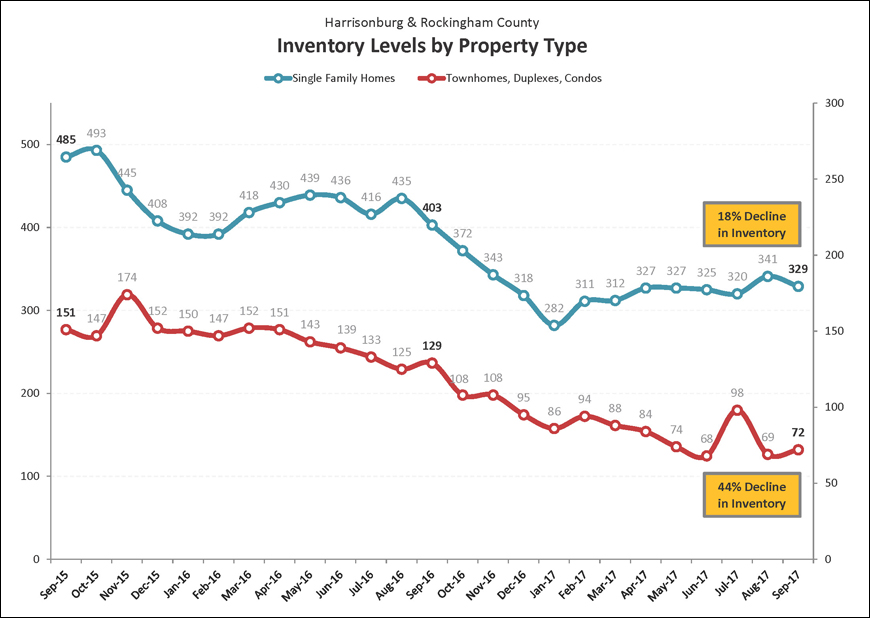 This graph examines the differences in inventory levels over time when examining only single family homes as compared to attached dwellings (townhouses, duplexes, condos). The number of single family homes for sale has decreased by 18% over the past year, while the number of townhouses, duplexes and condos for sale has decreased by a startling 44% over the past year! All we can hope is that these inventory levels will start to climb again (??) as we continue through the Fall market, as there are many buyers in our local market who are anxious to buy, but not finding many properties that they would like to purchase. 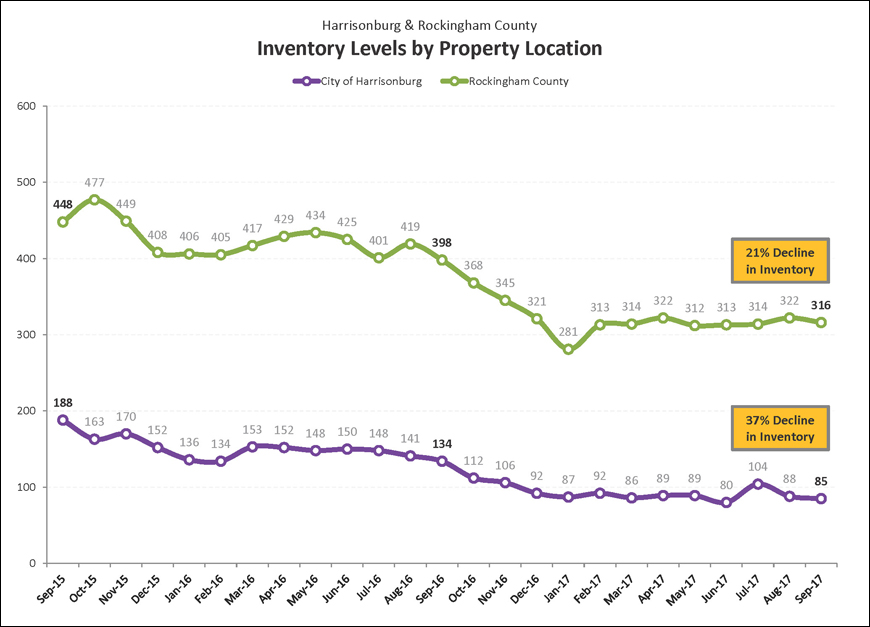 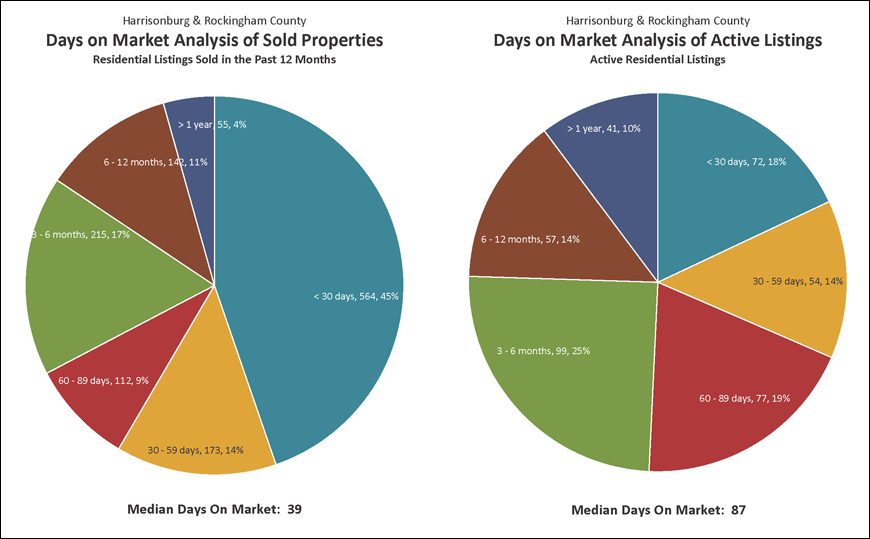 Declining inventory levels are contributing to an overall decline in the time it takes to sell a home in Harrisonburg and Rockingham County. The current median “Days on Market” is 39 days for homes that have sold in the past year. Remarkably, 45% of homes that have sold in the past year have gone under contract within 30 days of having hit the market. Combine that with those that went under contract during the second month on the market, and you’ll find that 59% of homes that sell go under contract within 60 days. The graph to the right, above, shows the length of time that each active listing has been on the market for sale. 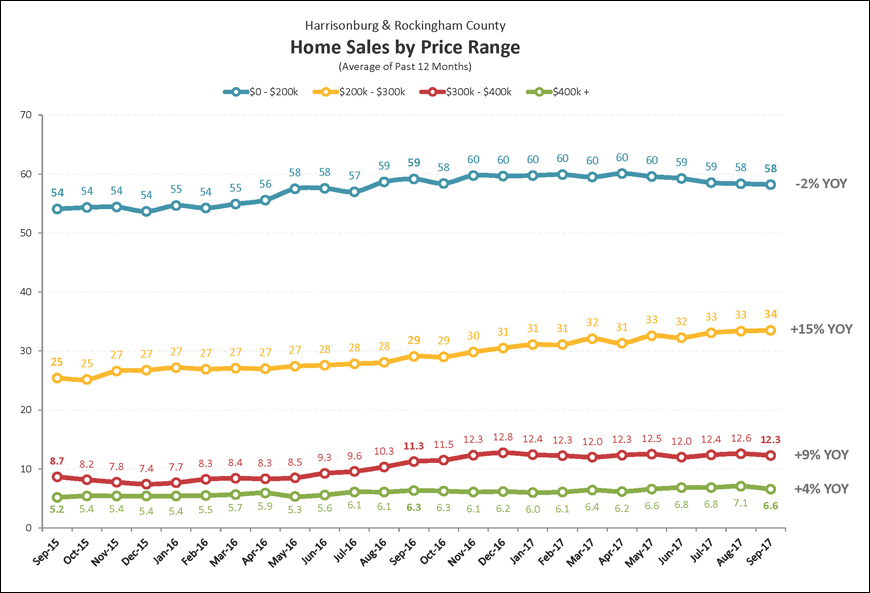 The pace of home sales in Harrisonburg and Rockingham County varies significantly based on price range. The graph above shows the average number of home sales per month (given a 12-month average) as we have passed through the past two years. Home sales have increased in almost all price ranges over the past year, with the only slight decline (-2%) being in the under $200K price range. The largest increase in sales has been in the $200K - $300K price range where we have seen a 15% year over year increase in the pace of home sales. The $300K - $400K and $400K+ price ranges have seen a 9% and 4% increase, respectively. 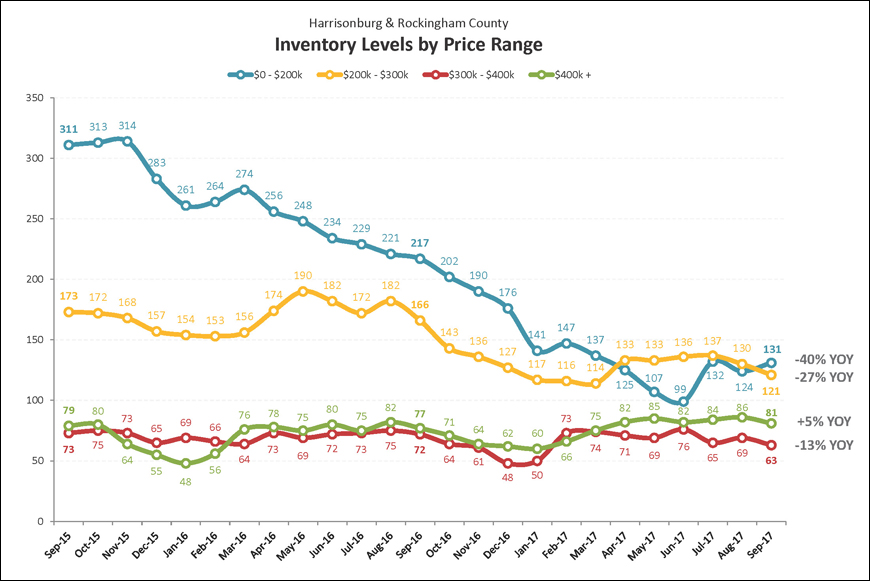 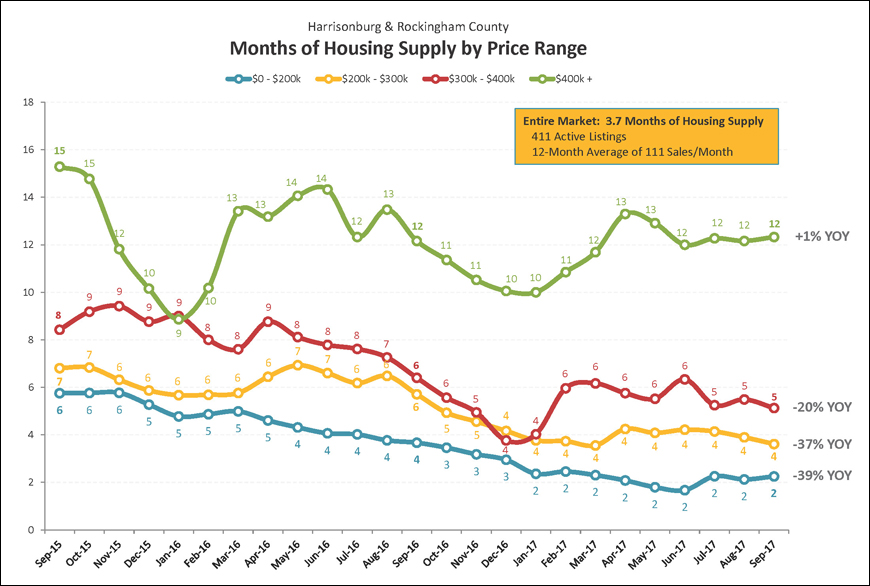 With so many home sales (lots of buyers) and so few homes on the market (not so many sellers), there are low levels of supply in some price ranges in our local real estate market. The graph above illustrates that while it would take 12 months to sell all of the homes currently for sale over $400K if the same number of buyers bought each month as have been buying (on average) over the past 12 months -- it would only take two months (!!) to burn through the under $200K inventory. Many consider a six month supply to be a balance between buyers and sellers, and we are now only close to that in the $300K - $400K price range. 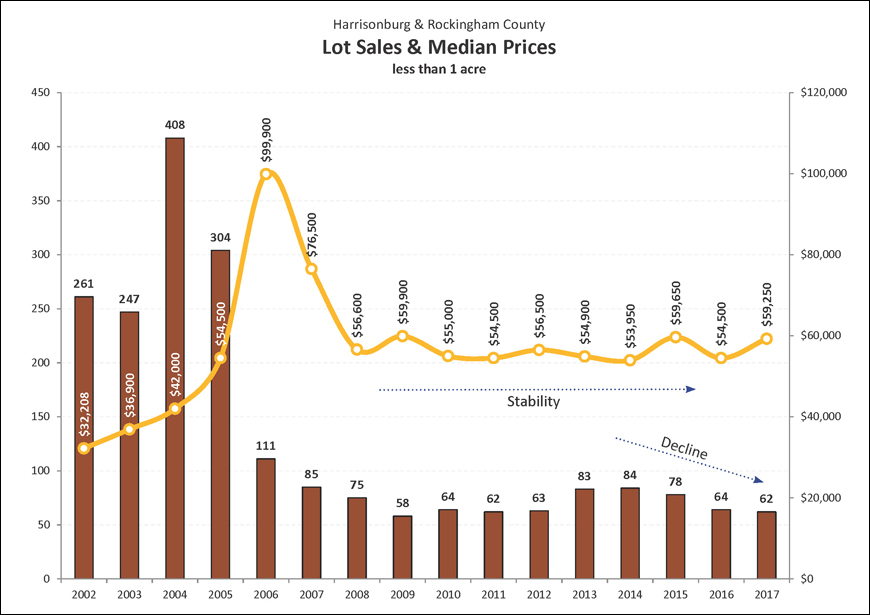 After some modest recovery in the pace of sales of lots of less than an acre over the past few years, there were fewer of these sales in 2016 (64) as compared to 2015 (78) and 2014 (84). That slowing pace of lot sales did not stop sellers in 2015 from being able to obtain higher prices for their building lots with a median sales price of $59,650 -- but that median price then declined during 2016 to only $54,500. Despite the lack of increase in lot sales, we are seeing quite a bit of stability in the median sales price -- and it seems nearly certain that we will see an overall increase in these lot sales in 2017 based on the 62 sales seen thus far in 2017. 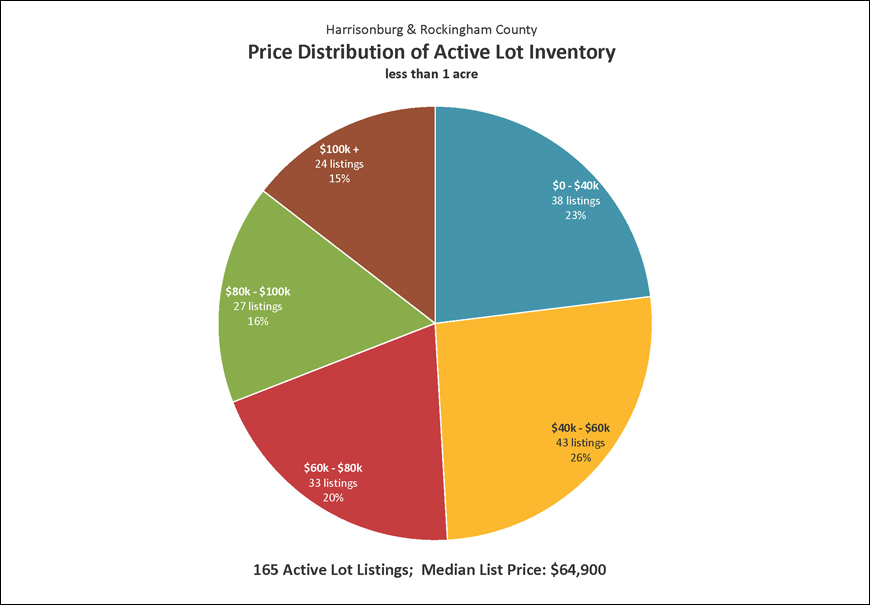 Despite the fact that only 64 lots (of less than an acre) sold in all of 2016, there are a remarkable 165 lots currently for sale. Some sanity exists in this listing market, however, as the median list price of lots for sale ($64,900) is not too much higher than the 2016 median sales price of $54,500. Given last year’s 64 lot sales, if no other lots were listed for sale, it would take 2.6 years to sell all of the lots currently listed for sale. As you can see above, a significant portion of the lots currently listed for sale are priced above $60,000 --- thus many sellers have offering prices higher than recent (2011-2016) median sales prices. 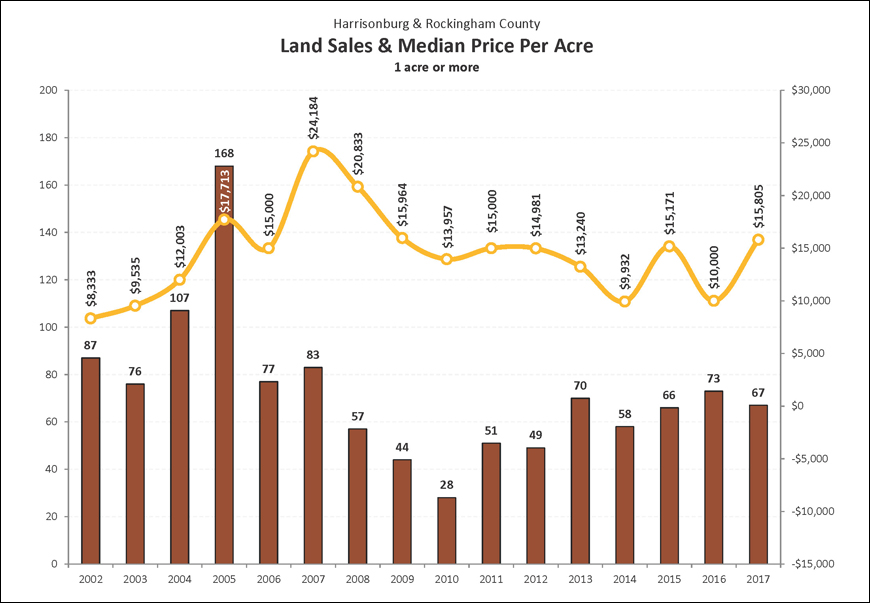 Parcels of land larger than one acre in Harrisonburg or Rockingham County increased in pace during 2016 to 73 land sales -- marking the highest year of sales since 2007. That said, during that same timeframe, the median price per acre has fallen from $24,184 (in 2007) down to $10,000 (in 2016). Some aspects of this “median price per acre” calculation are affected by which parcels actually sell in a given year, but it is clear that land prices have been trending slowly down over the past five or so years. We are now seeing an increase in buyer demand in 2017, which may be leading to a further increase in the median price per acre. 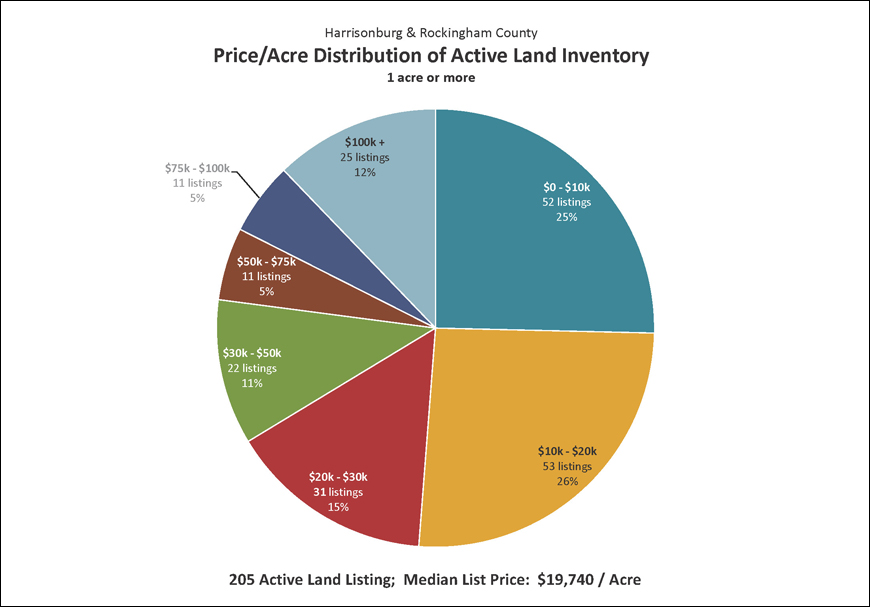 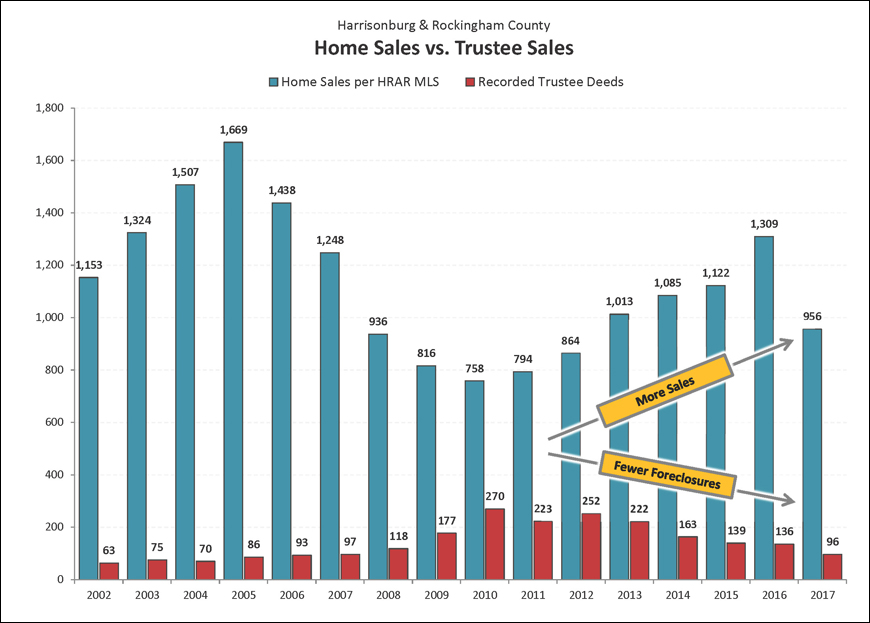 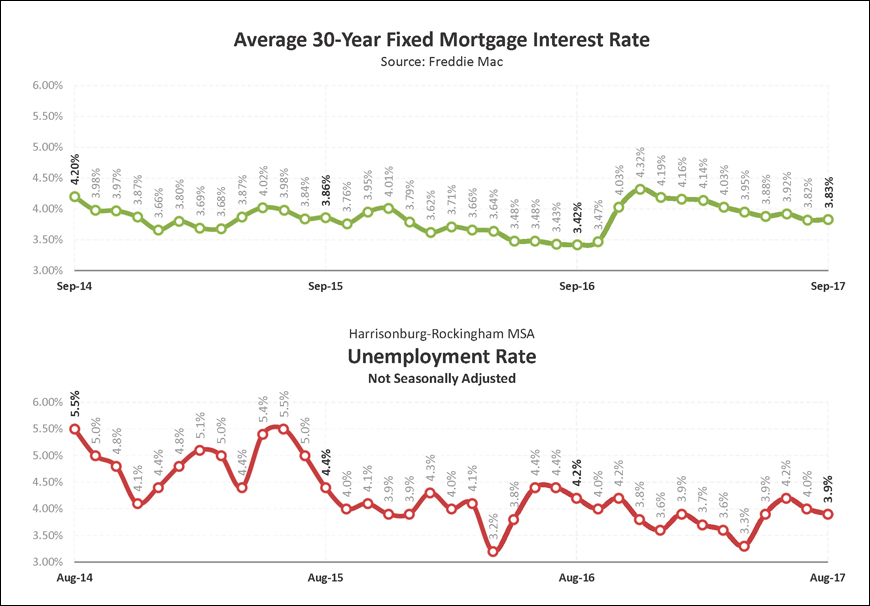 As shown in the top graph above, for most of the past three years, home buyers have seen tremendously low interest rates -- almost always under 4%. After jumping up above 4% in early 2017, interest rates have been steadly declining over the past nine months, and now are back below 4.0%. The second graph above illustrates trends in the local unemployment rate -- which has shown a general downward trend over the past several years. A low local unemployment rate and relatively low mortgage interest rates continue to help our local housing market remain stable and start to grow in recent years. 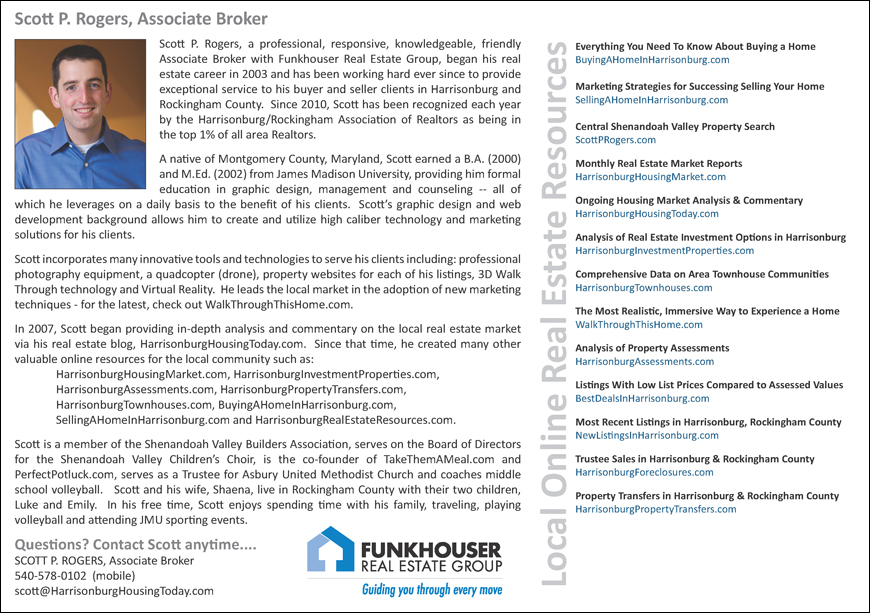