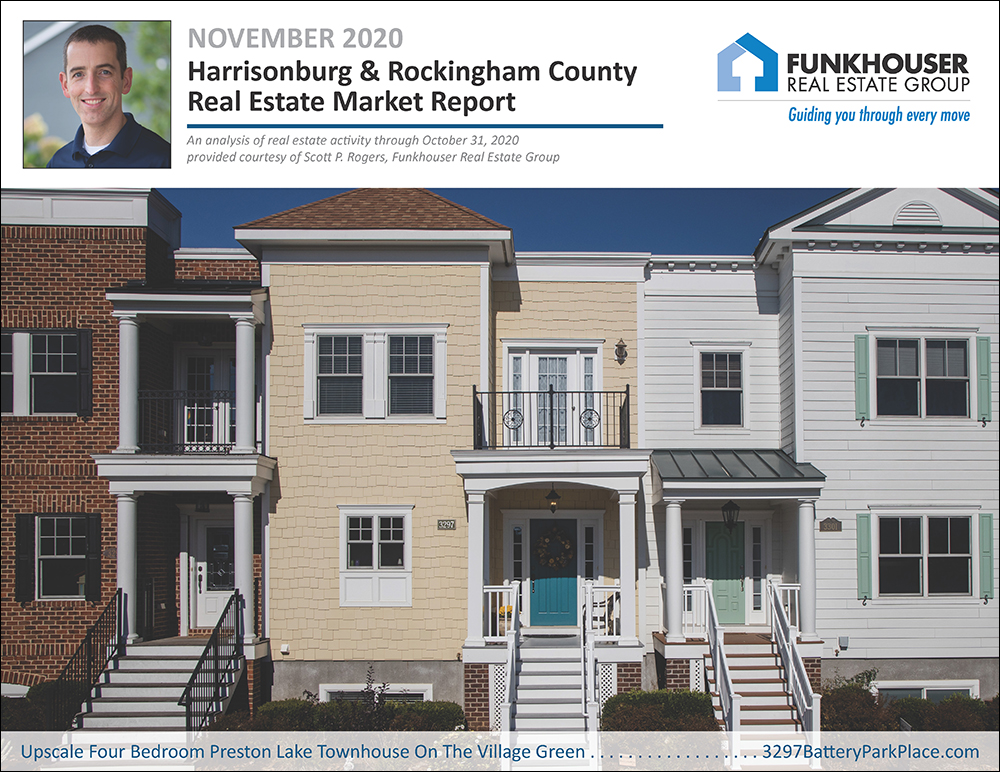 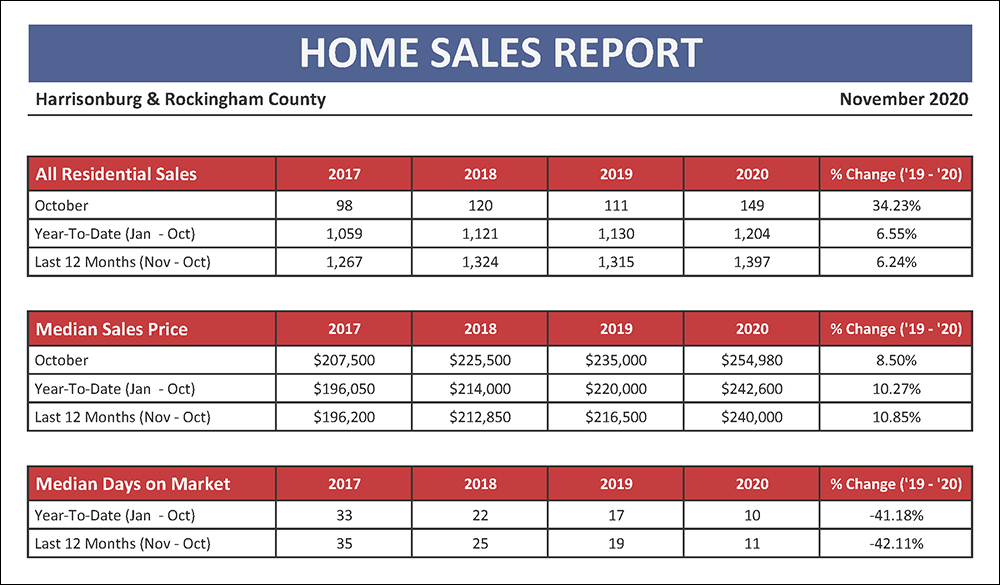 There were a surprisingly high number of closed home sales in October! The 149 home sales seen this October was 34% higher than we saw last October, and propelled the year to date sales pace to 1,204 sales -- which is 6.55% ahead of where we were at this time last year. Meanwhile, median sales prices have continued to rise with a 10% increase in the median sales price over the past year. All of these home sales are also happening quite quickly - with a median of 10 days on the market for the 1,204 home sales that have taken place thus far in 2020. 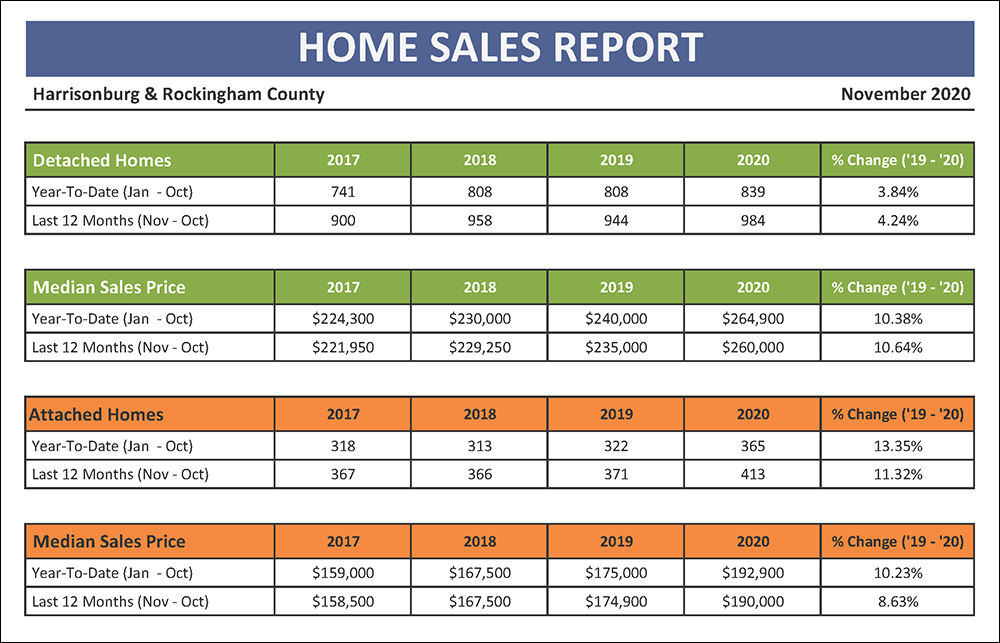 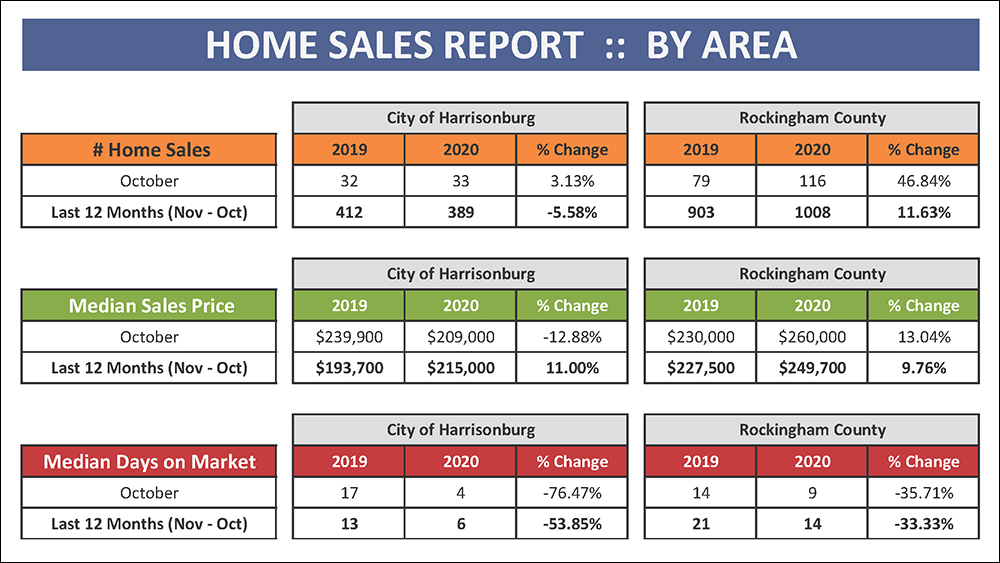 Generally, each year, more than twice as many homes sell in Rockingham County as compared to the City of Harrisonburg. Over the past 12 months, we have seen somewhat of a decline (-6%) in City home sales while we have seen an increase (+12%) in the pace of County home sales. The median sales price of homes in the City and County have both increased - with a 11% increase in price in the City and a 9.76% price in the County. The median sales price is a good bit higher in the County ($249,700) than in the City ($215,000) though this may be a result of most townhouses being located in the City. 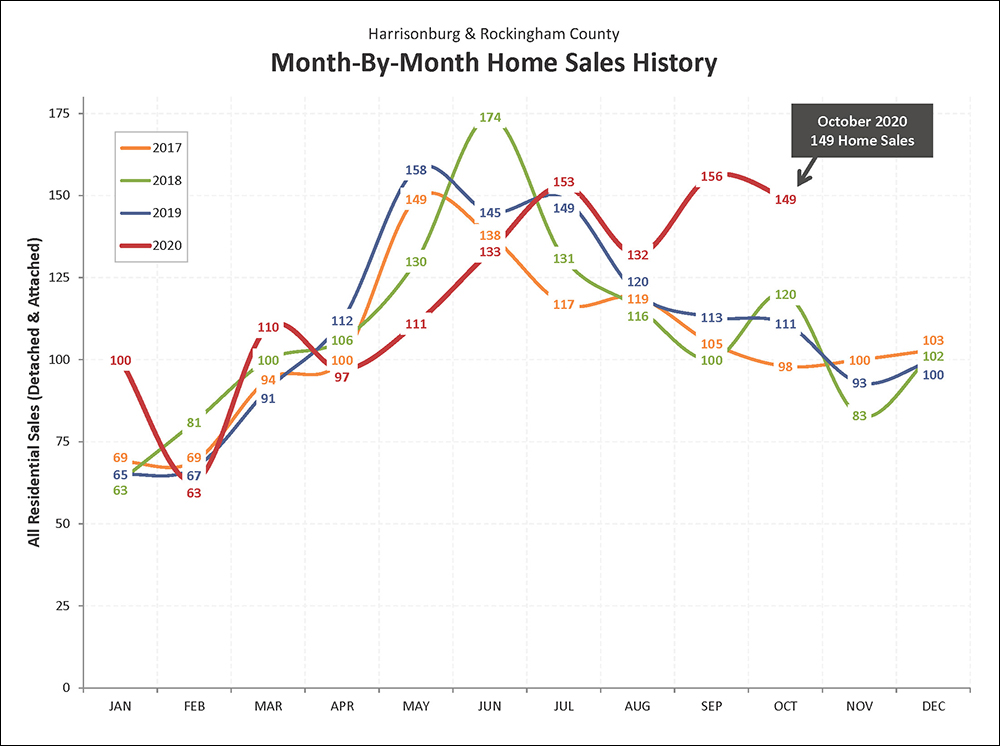 What a wild year! Clearly, late spring and early summer underperformed, as home sales in April, May and June were lower this year than any of the past three years. But then, look out July through October! Each month since July we have seen record numbers of home sales when compared to the past three years. The higher pace of home sales this year is most evident, however, when we get to September and October which drastically outpaced any previous September and October. I’m about finished making predictions for 2020 but I wouldn’t be surprised if we saw record numbers of closed sales in November and December as well! 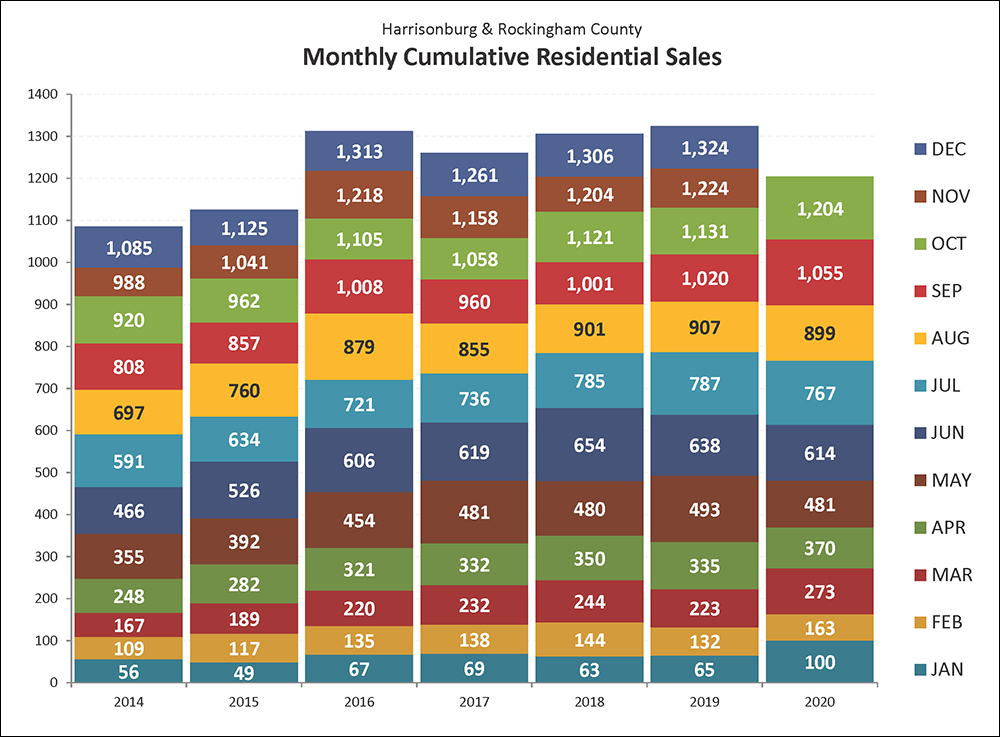 This colorful graph offers another way to look at the overall sales trends for the past few years in the Harrisonburg and Rockingham County housing market. As shown above, our local housing market experienced has seen steady growth over the past three years to a total of 1,324 home sales during 2019. This was the highest total number of home sales seen in a single year for more than a decade. While the annual pace of home sales seemed to be lagging behind earlier in 2020 it is now evident that we are likely to see another increase in the annual pace of home sales in 2020. Perhaps 1,350? 1,375? 1,400?? 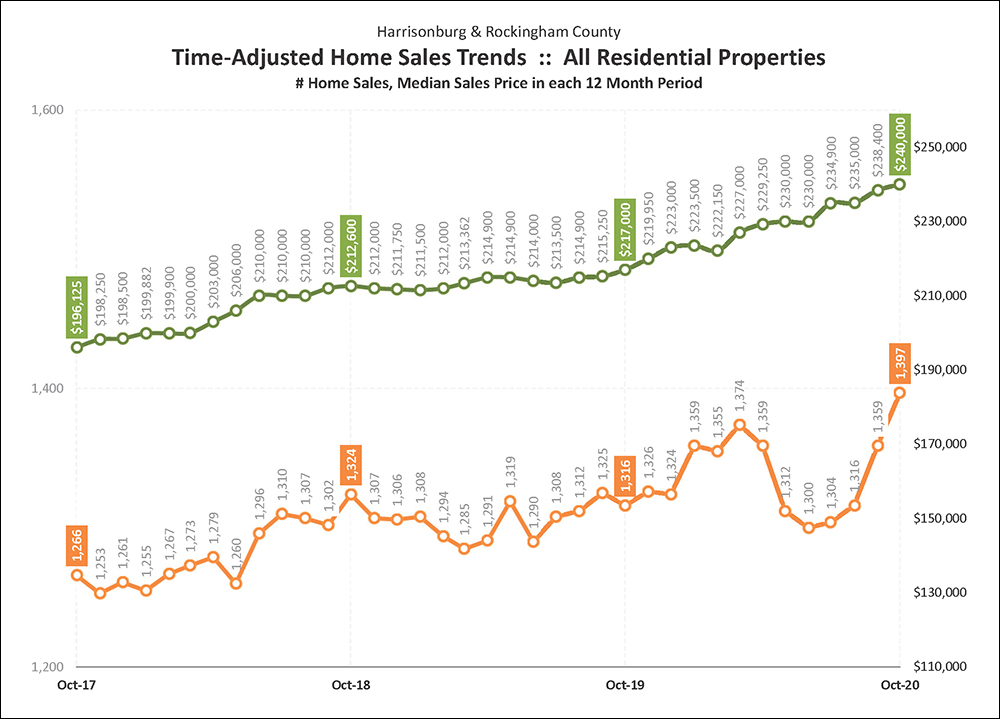 This graph shows a rolling 12 month trend line of the number of homes sold in the Harrisonburg and Rockingham County area, as well as the median price of the homes that sold during these time frames. Each data point shows one year’s worth of home sales, which eliminates the volatility of evaluating sales figures on a monthly basis. After the annual pace of home sales had risen steadily for two and a half years it dipped for about four months due to COVID - though it has now rebounded and risen even more. Meanwhile, the median sales price keeps on climbing up to a median of $240,000 for all home sales in Harrisonburg and Rockingham County. 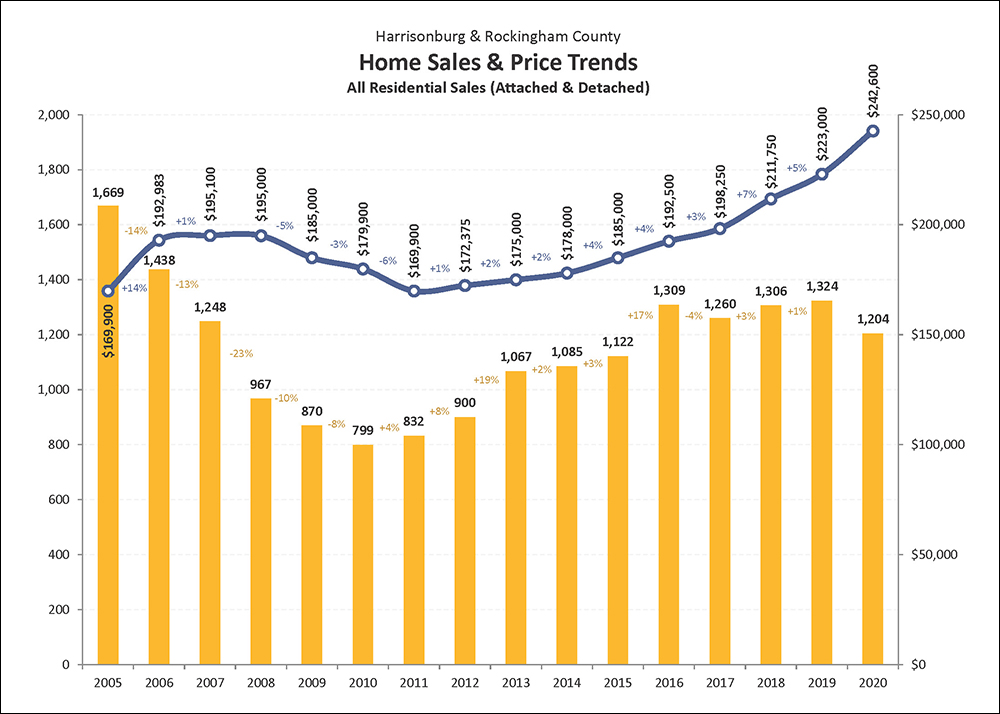 This graph provides an overall indicator of the state of our housing market, showing both the number of homes being sold each year since 2005 (yellow bars) as well as changes in the median sales price during the same time period (blue line). Over the past nine years we have seen relatively steady increases in the number of homes sold each year in Harrisonburg and Rockingham County - up to 1,324 last year. The median sales price has also been consistently increasing for eight years now, up to an all time high last year of $223,000. Thus far in 2020, the median sales price seems to be rising even faster than in recent years. 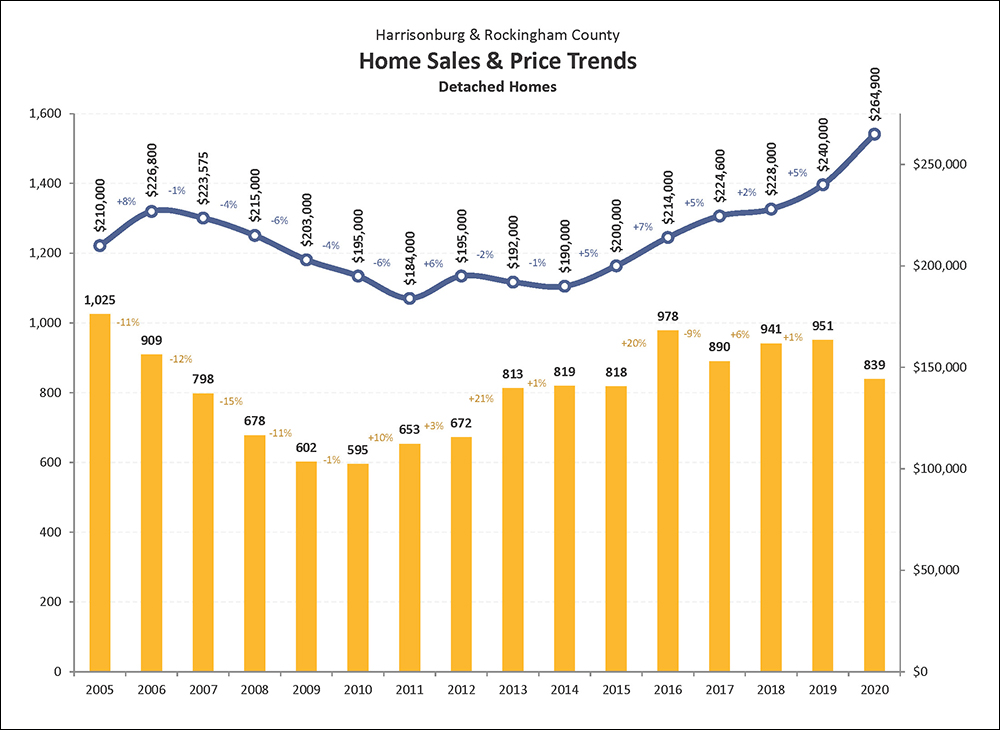 The single family home market in Harrisonburg and Rockingham County has improved rather steadily over the past nine years with increases almost every year in the number of homes sold. Technically, we saw a peak in 2016 that we have not yet matched, though there were slight increases between 2017 and 2018 as well as between 2018 and 2019. The median sales price of these single family homes has also steadily increased over the past five years -- from $190,000 to last year’s median sales price of $240,000. The median sales price is showing signs of heading even higher, even faster, this year - jumping well above $260,000! 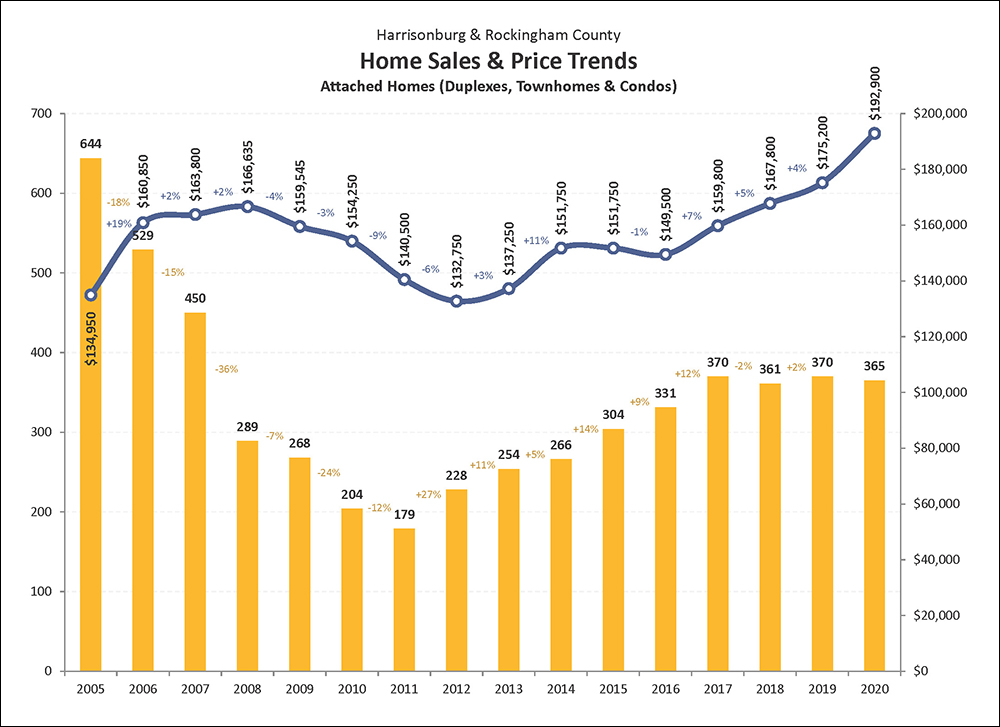 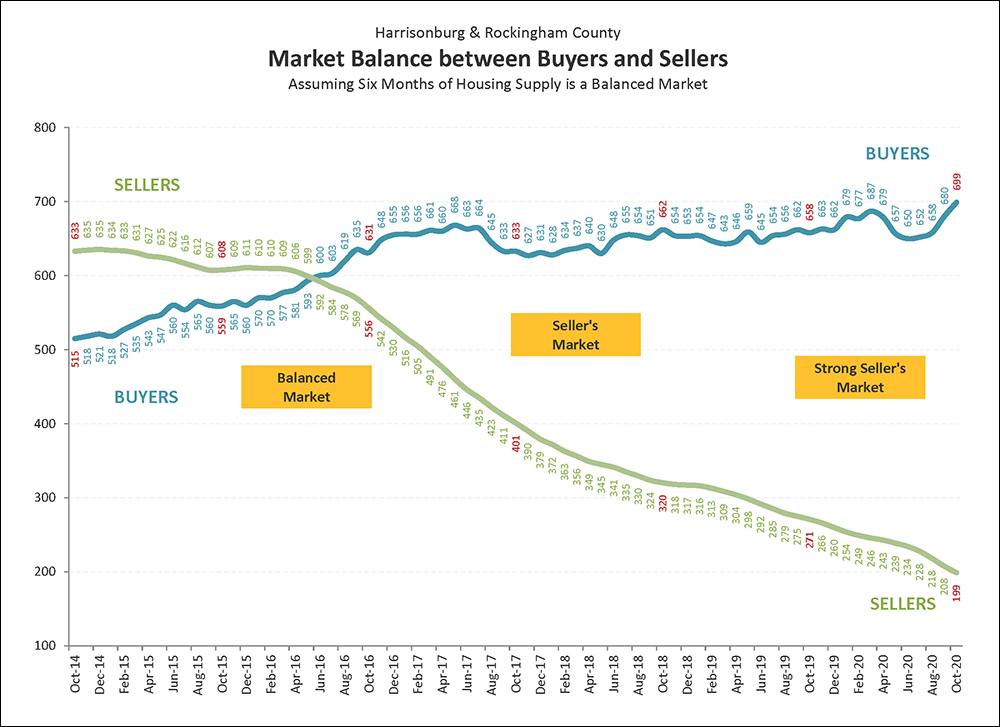 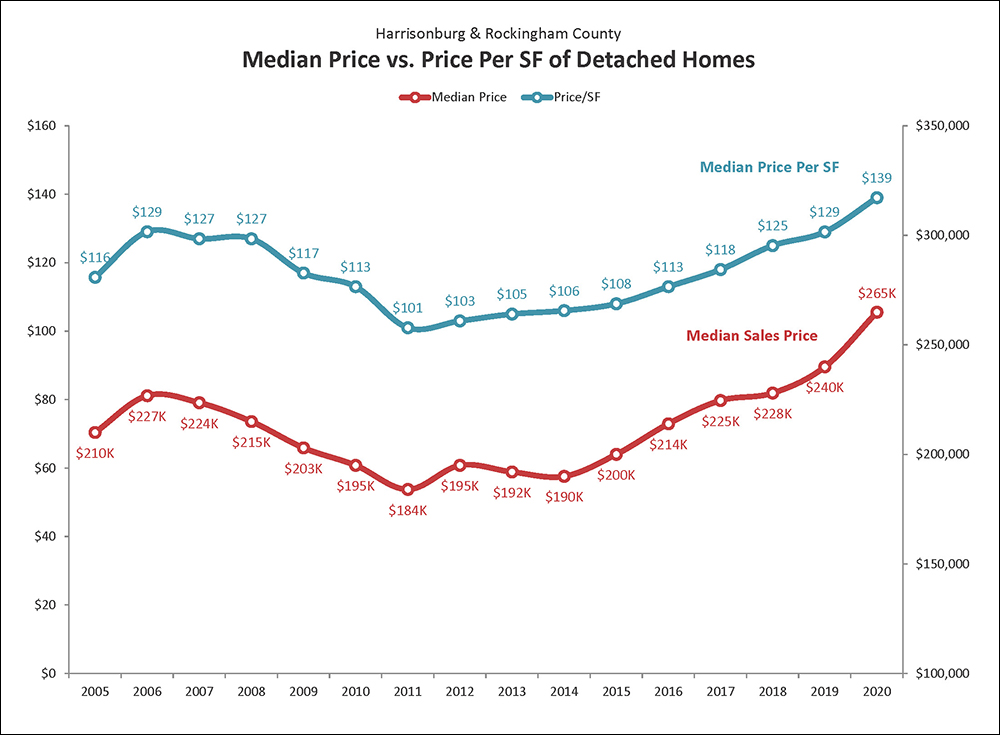 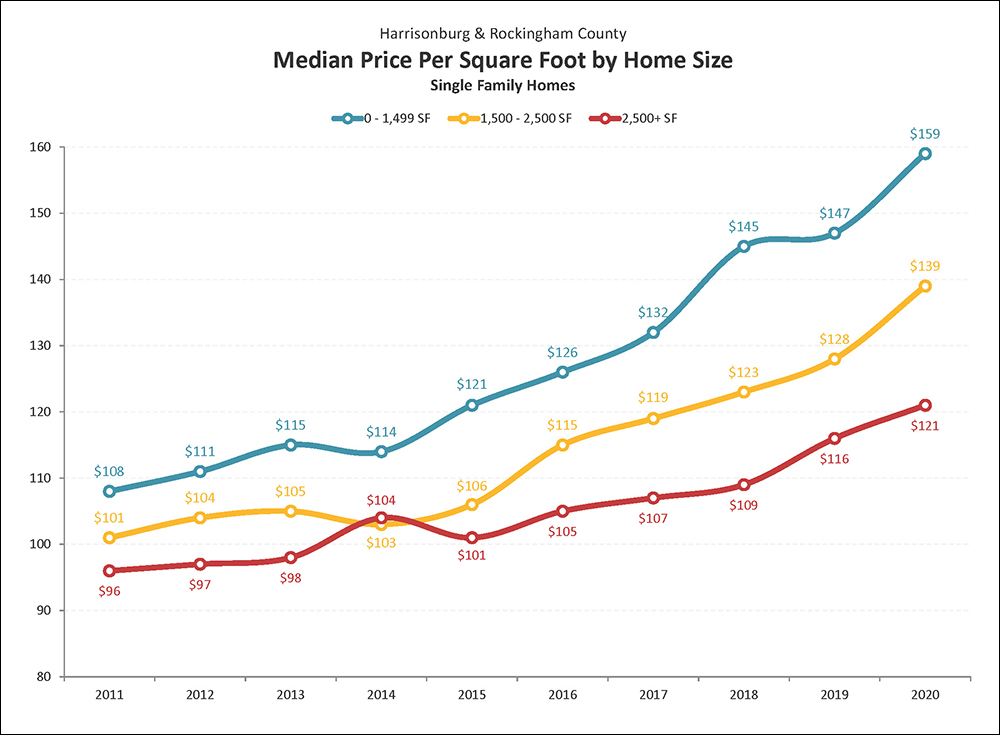 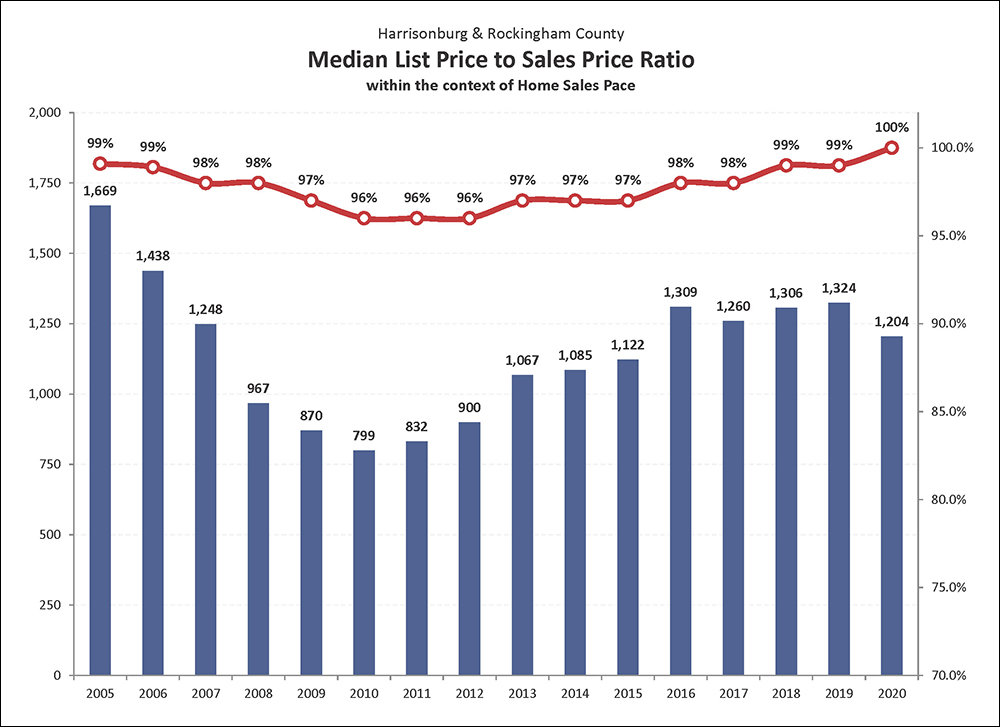 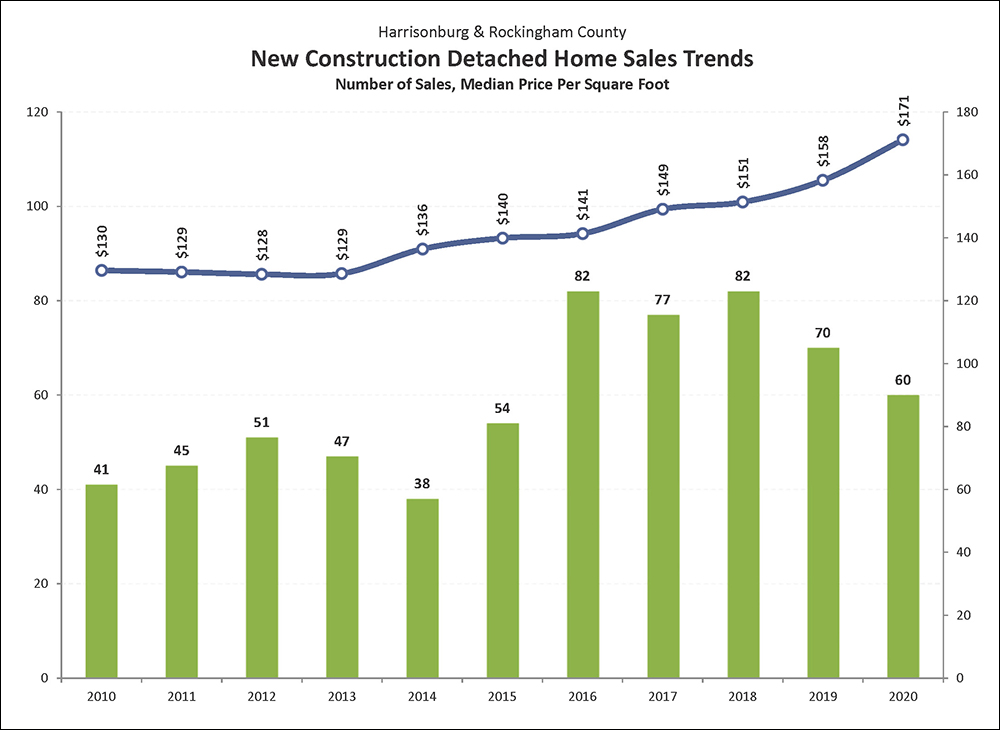 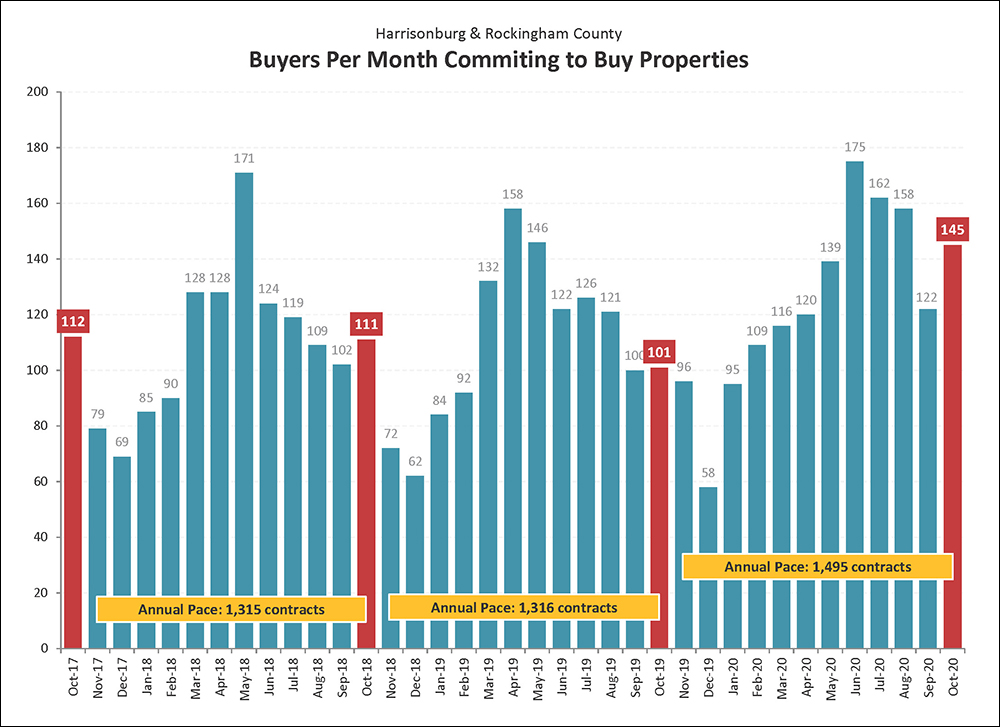 Buyers were out in full force this summer! After a slower start to the year, buyers (and sellers) signed a surprisingly high number of contracts in summer and fall of 2020 in Harrisonburg and Rockingham County! Last year between June and October 570 buyers (and sellers) signed contracts - but this year during that same timeframe (June through October) a total of 762 buyers and sellers signed contracts! This strong five month period of buying activity has lead to an annual pace of 1,495 contracts being signed during the past 12 months as compared to only 1,316 contracts during the prior 12 months! 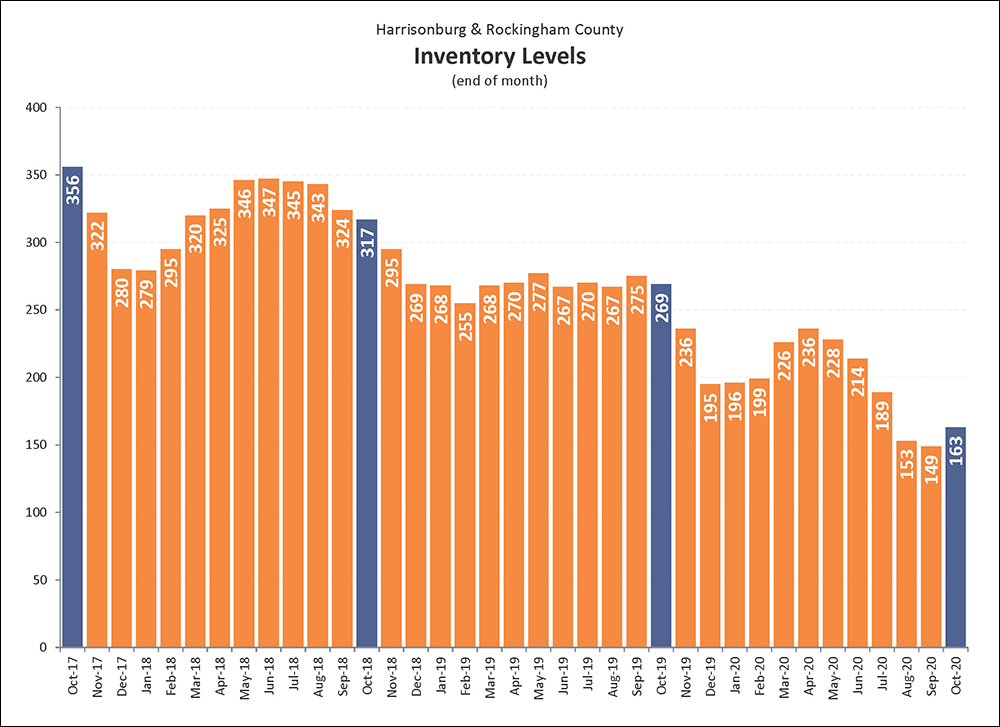 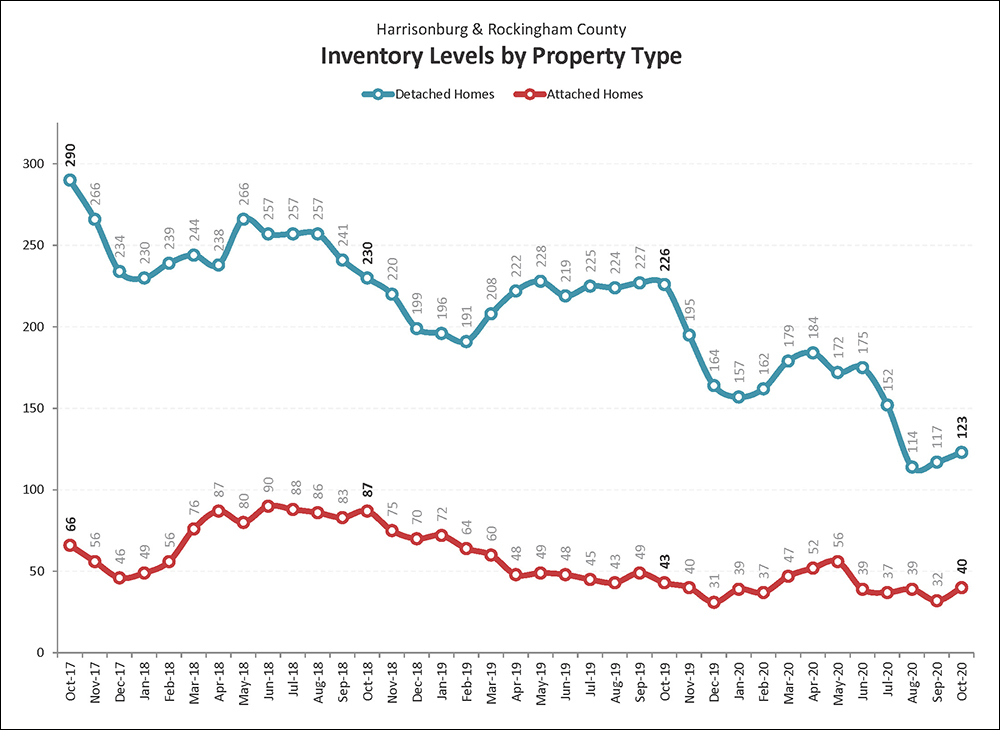 This graph examines the differences in inventory levels over time when examining only single family homes as compared to attached dwellings (townhouses, duplexes, condos). The number of detached homes for sale has decreased by 46% over the past year, while the number of attached homes (townhouses, duplexes and condos) for sale has declined by only 7% over the past year, though the inventory levels of attached homes started much lower! I was hopeful that we would see inventory levels rise as this past spring or summer of this year -- but as soon as sellers listed their homes for sale, buyers then turned around and bought them. 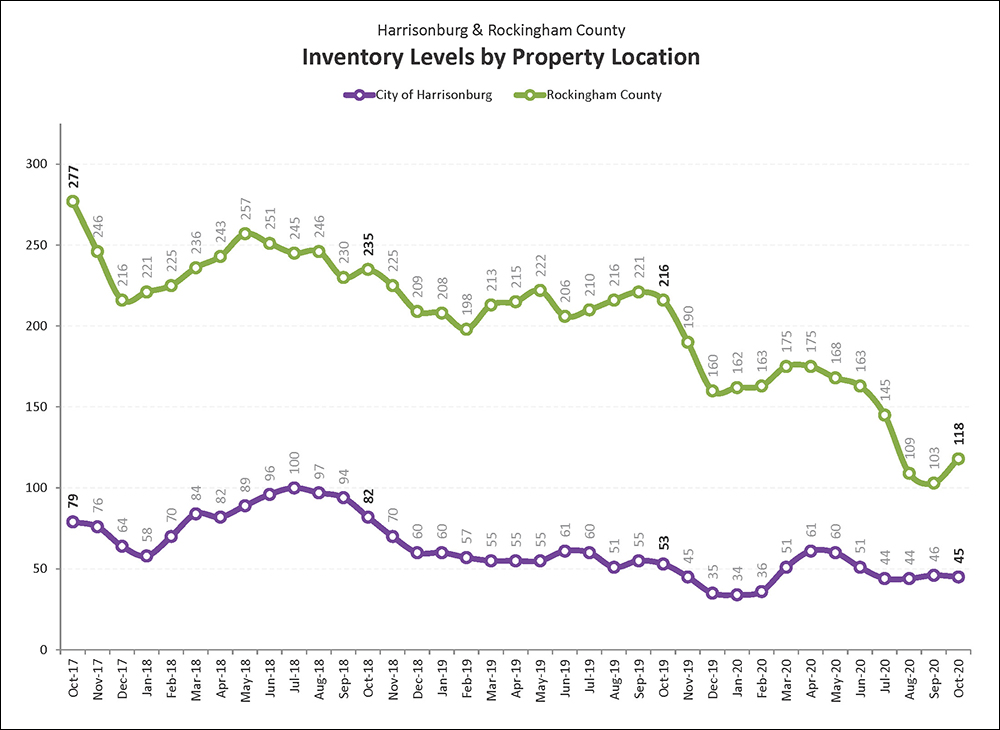 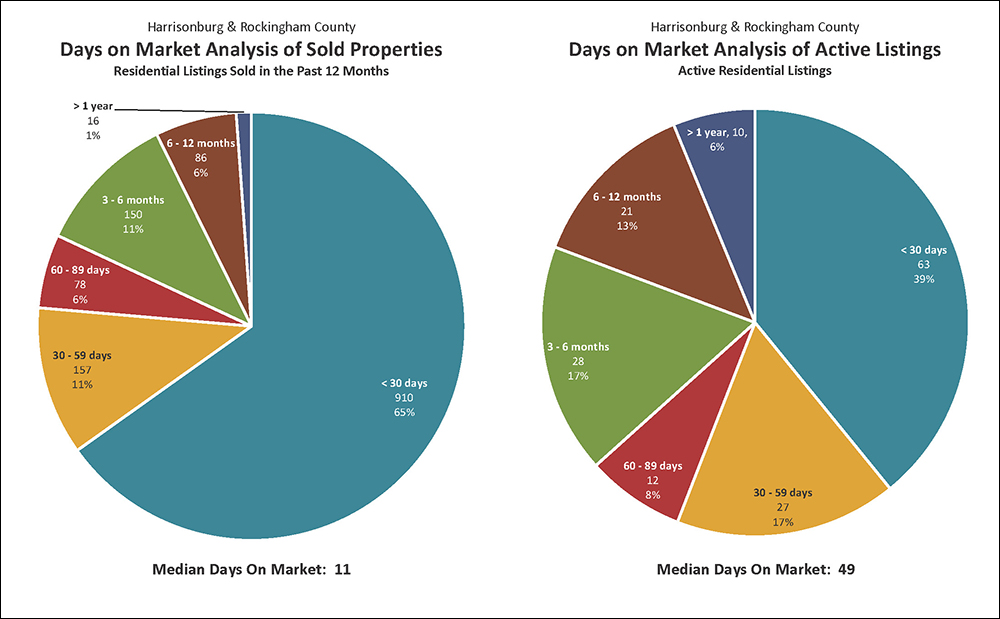 Declining inventory levels are contributing to an overall decline in the time it takes to sell a home in Harrisonburg and Rockingham County. The current median “Days on Market” is 11 days for homes that have sold in the past year. Remarkably, 65% of homes that have sold in the past year have gone under contract within 30 days of having hit the market. Combine that with those that went under contract during the second month on the market, and you’ll find that 76% of homes that sell go under contract within 60 days. The graph to the right, above, shows the length of time that each active listing has been on the market for sale. 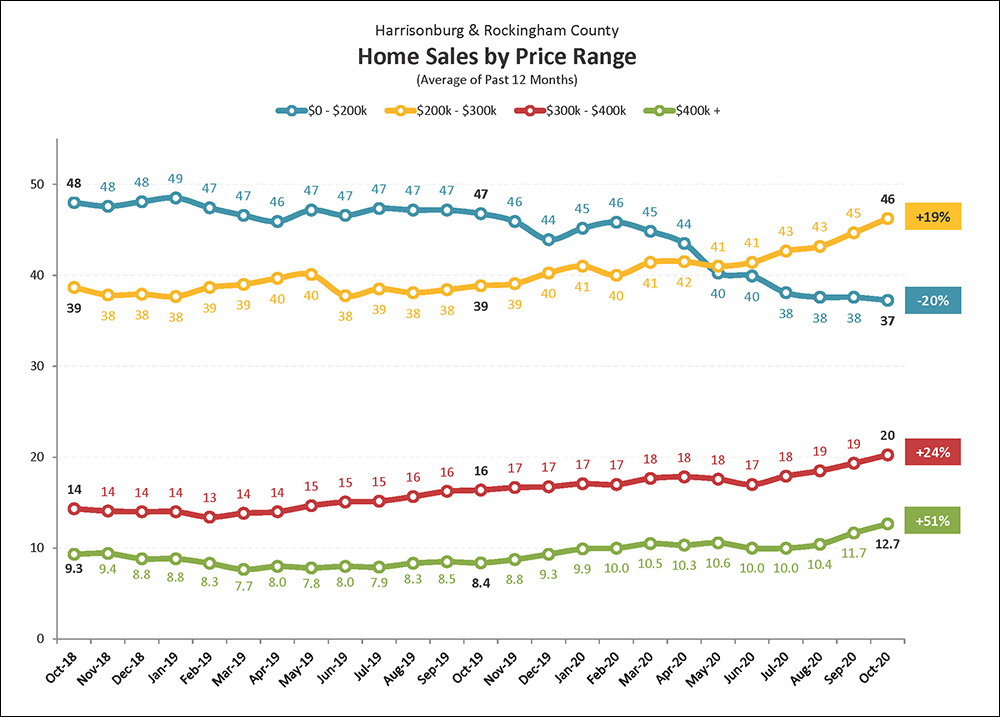 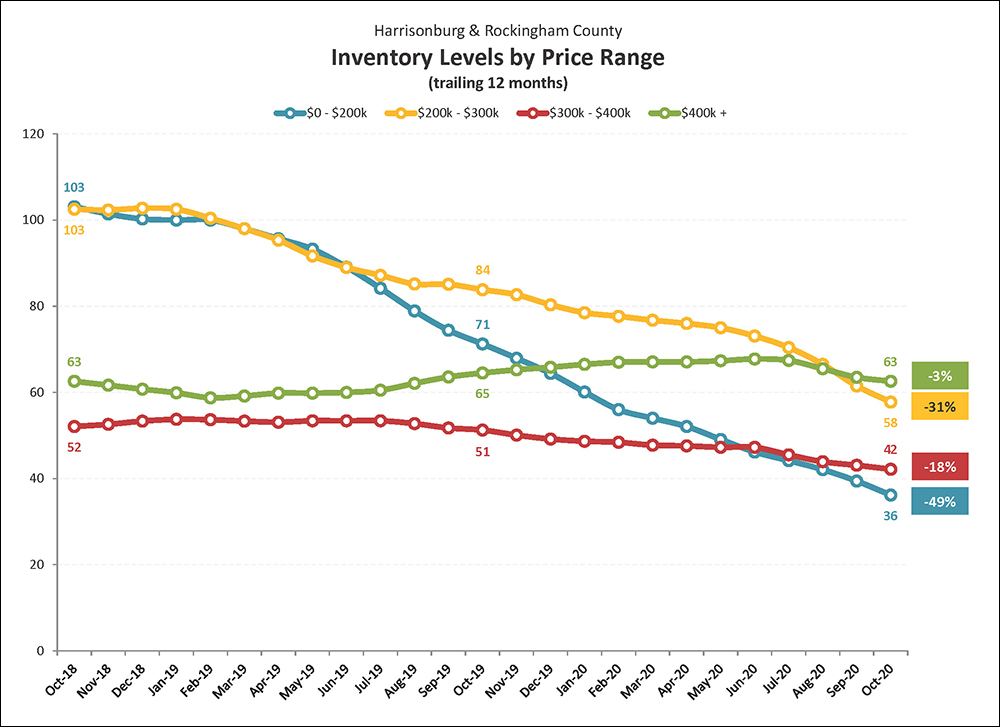 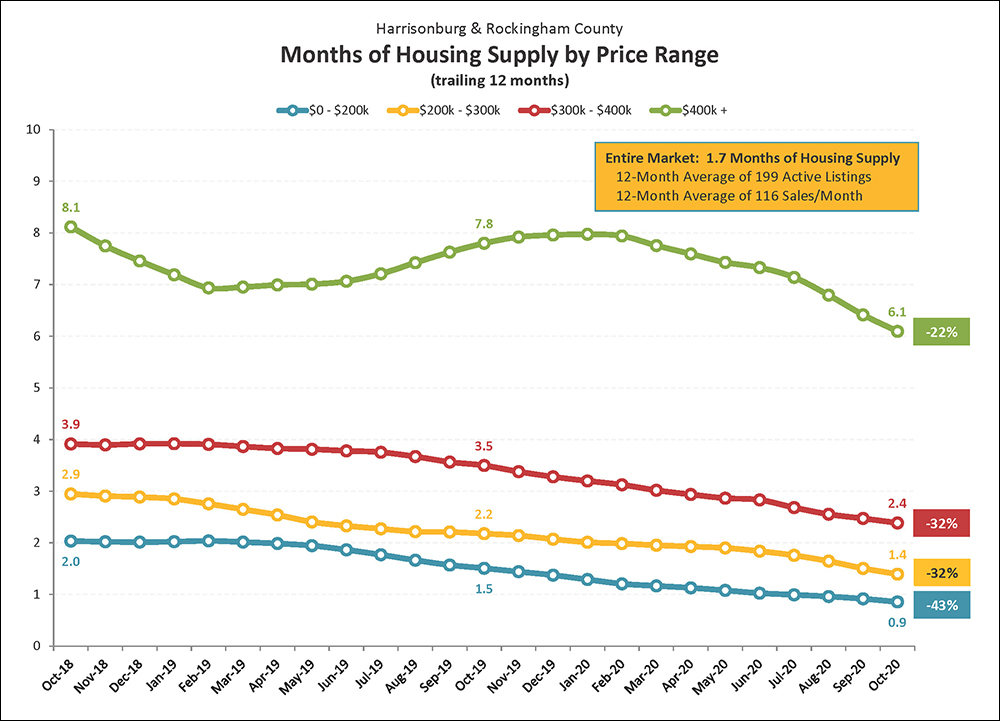 With so many home sales (lots of buyers) and so few homes on the market (not so many sellers), there are low levels of supply in some price ranges in our local real estate market. The graph above illustrates that while it would take approximately six months to sell all of the homes currently for sale over $400K if the same number of buyers bought each month as have been buying (on average) over the past 12 months and if no new listings came on the market -- but it would take less than one month (!!) to burn through the under $200K inventory. Many consider a six month supply to be a balance between buyers and sellers. 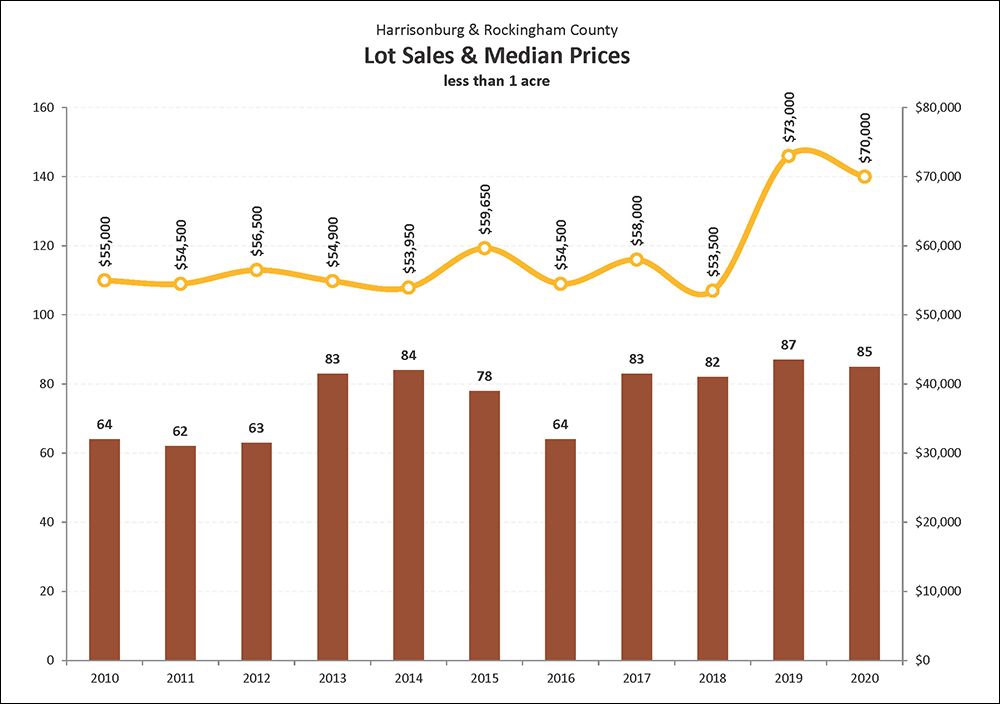 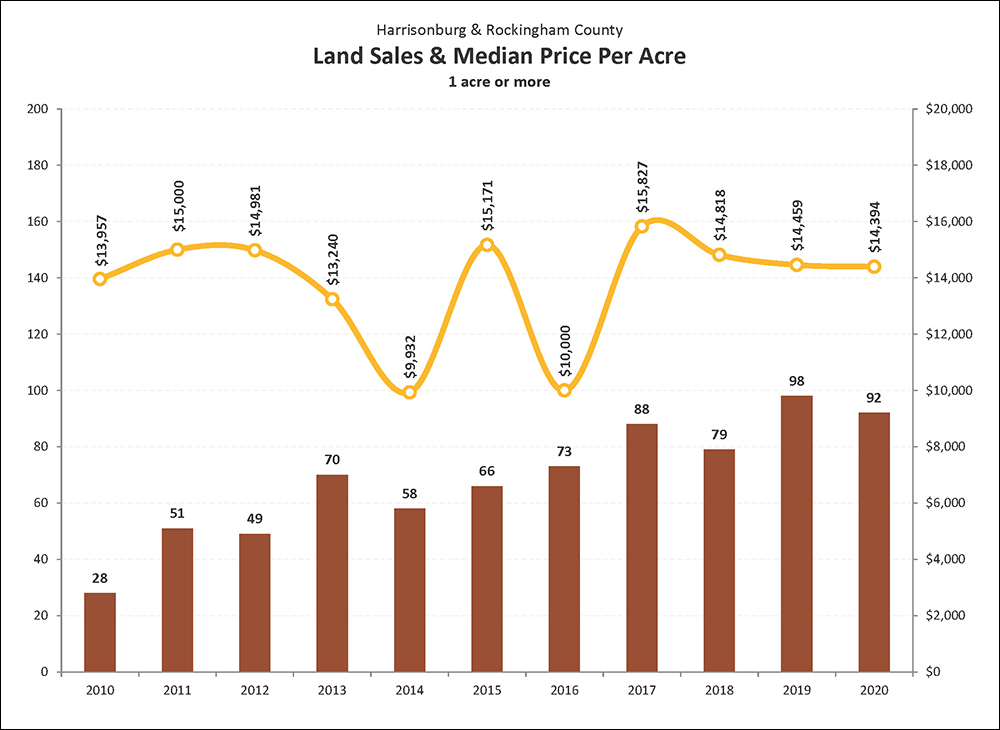 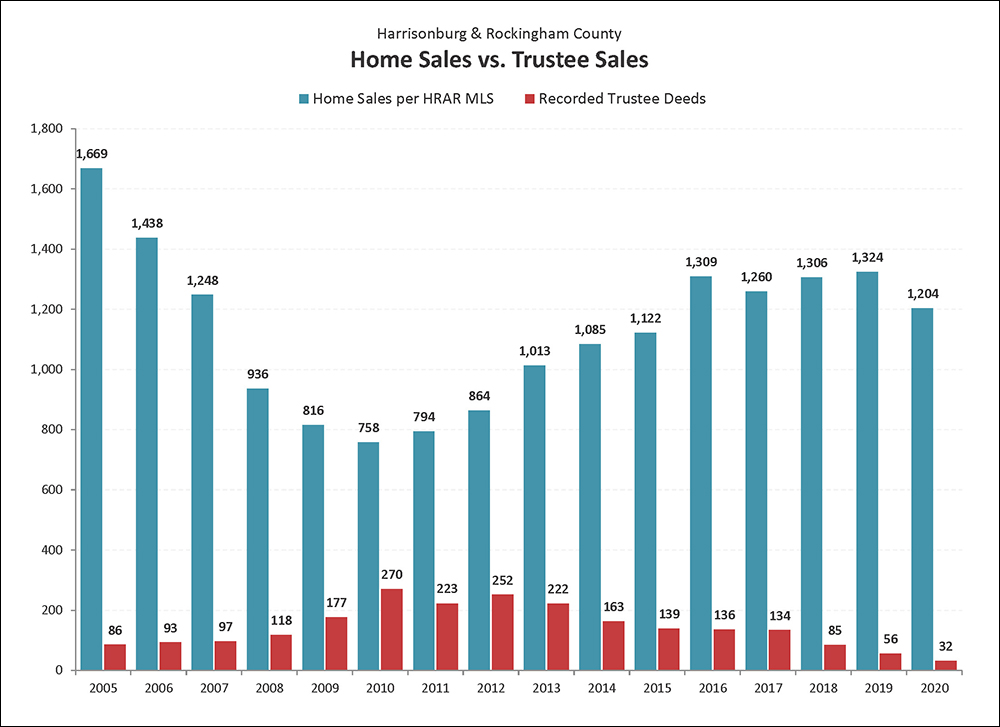 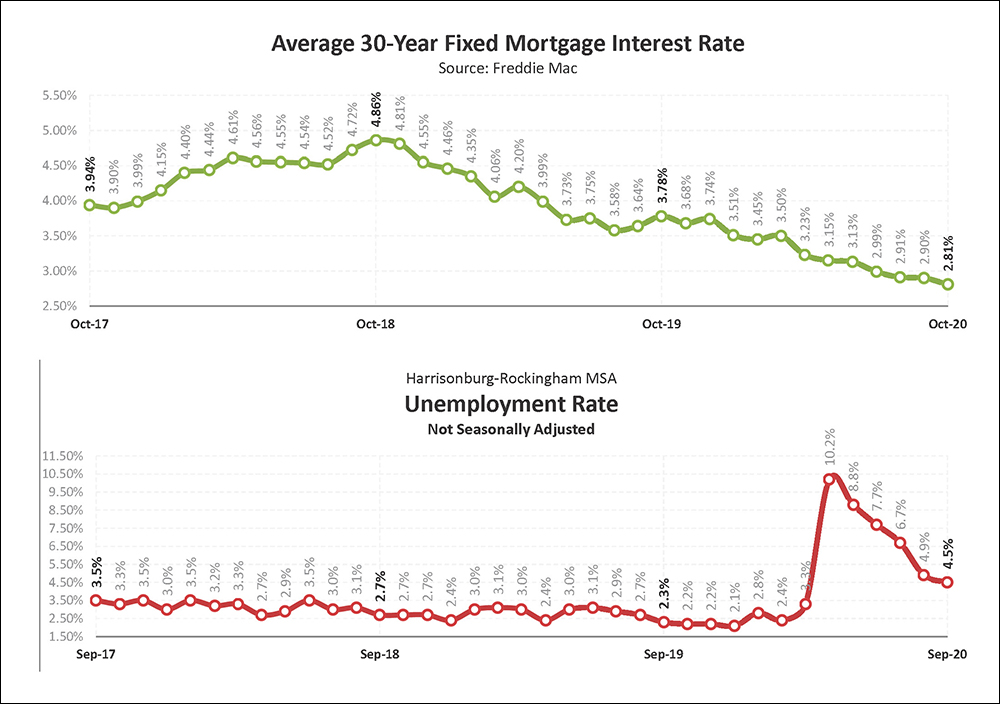 As shown in the top graph above, for most of the past three years, home buyers have seen tremendously low interest rates -- almost always under 4.5%. Over the past 18 months those interest rates have then dipped even lower to the current historically low rate of 2.81%. Never have we seen rates this low. The second graph above illustrates trends in the local unemployment rate -- which has trended downward over the past several years but which skyrocketed up to as high as 10.2% due to COVID-19 but has slowly dropped since then. A (usually) low local unemployment rate and low mortgage interest rates help our local housing market remain stable. 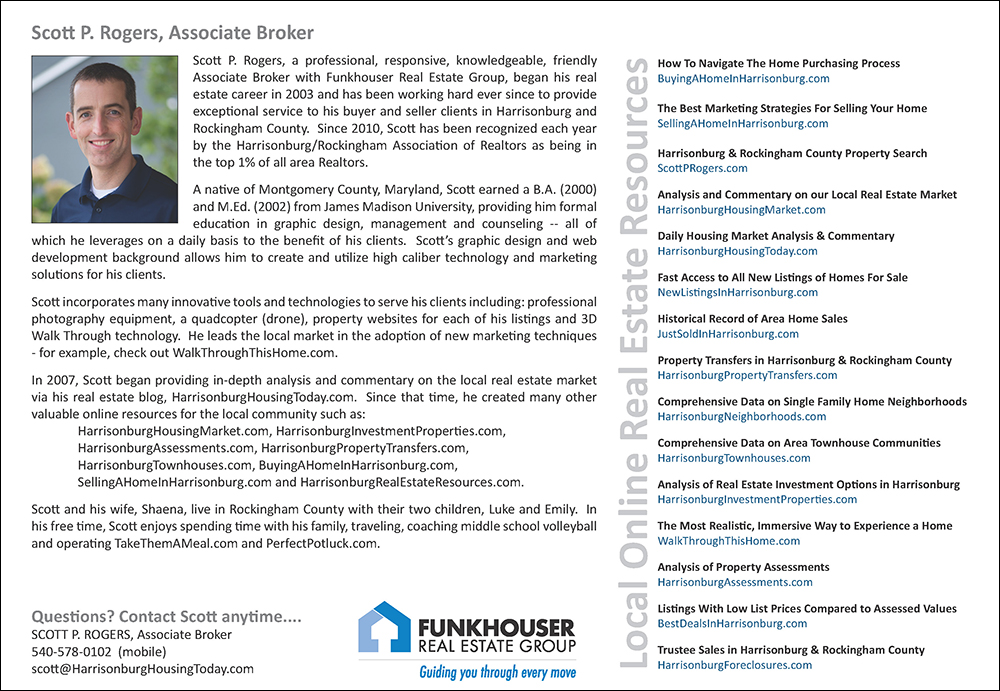