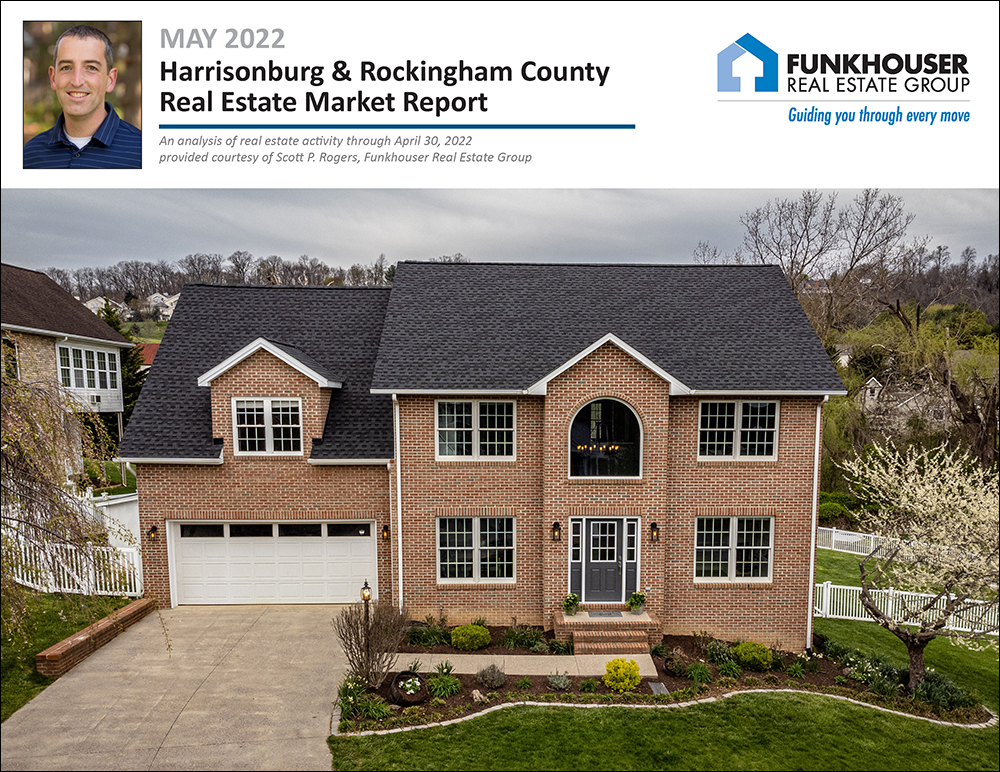 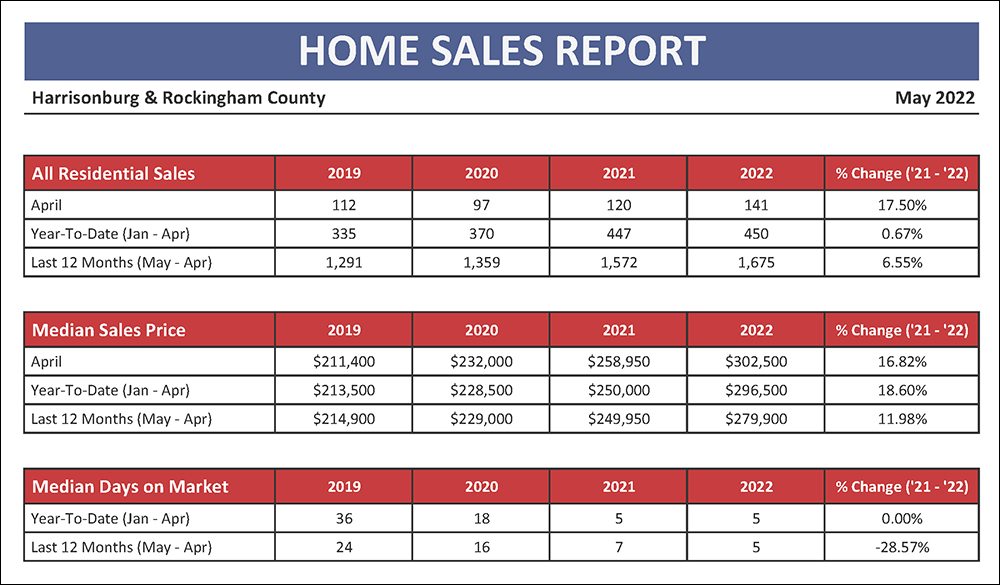 Home sales had slowed a bit last month in Harrisonburg and Rockingham County... but things accelerated, again, in April 2022. We saw 17.5% more home sales this April than last April, which brought the year to date sales figure up to just barely (1%) higher than last year during the same timeframe. Sales prices are now 19% higher in 2022 than they were in 2021, though only 12% higher when we look at the most recent 12 months compared to the 12 months prior to that. Homes are also continuing to sell ever faster with a current “days on market” of only five days. 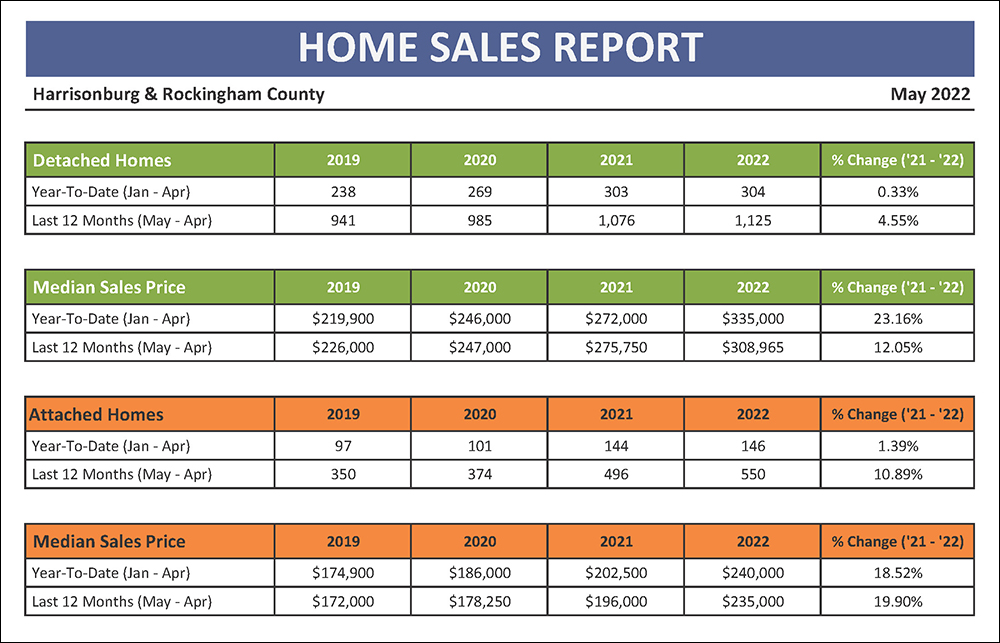 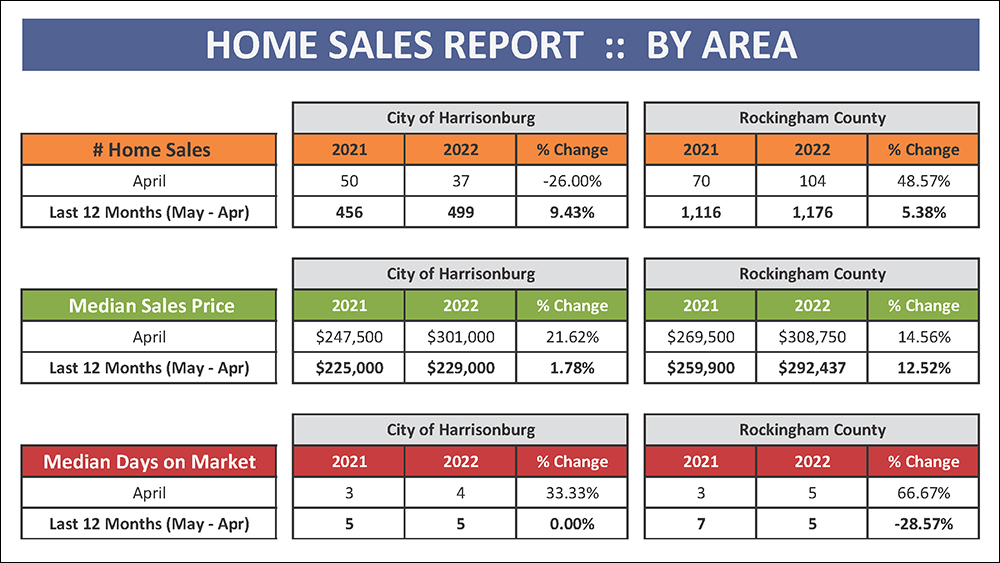 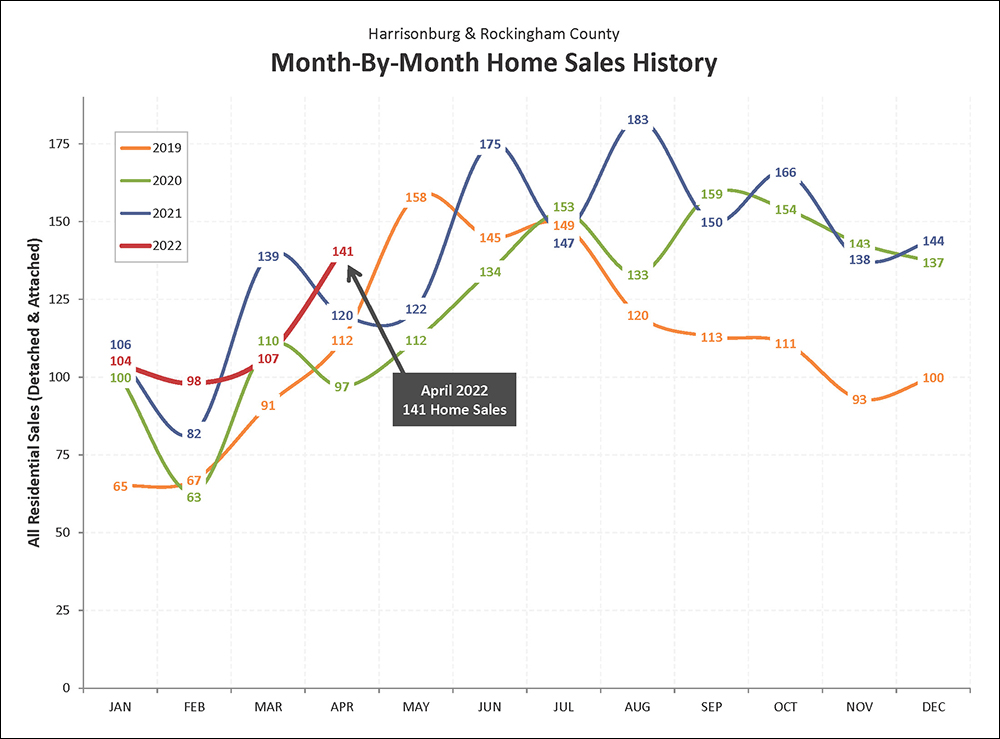 It has been another whirlwind of a start of the year here in the Harrisonburg and Rockingham County real estate market. After a rather mundane January, home sales in February soared almost to 100 in a month -- well above other recent months of February. March, however, saw a decline in monthly sales as compared to recent months of March, leaving some wondering whether rising interest rates were affecting buyer behavior. Rates may in fact be affecting buyer enthusiasm (maybe!?) but April home sales aren’t showing it, as monthly sales hurtled up to 141 for the month, well above recent months of April in our local market. 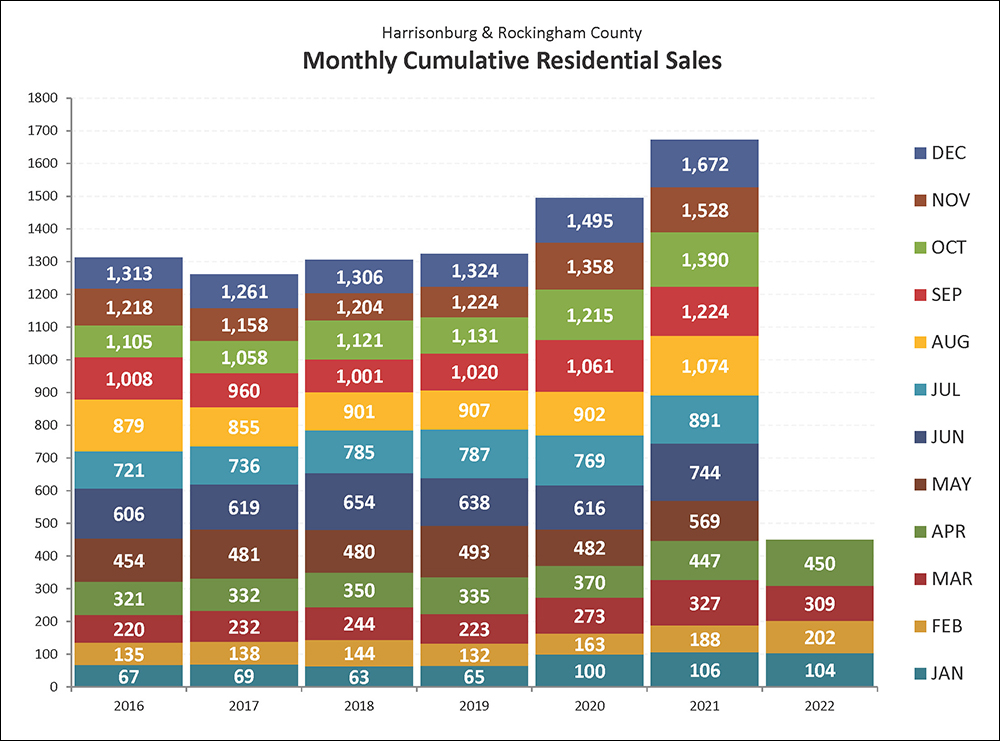 This colorful graph offers another way to look at the overall sales trends for the past few years in the Harrisonburg and Rockingham County housing market. For four years (2016-2019) we were consistently seeing about 1,300 home sales per year. Then, in 2020, at least partially fueled by primary and secondary effects of the Covid-19 pandemic, the pace of home sales escalated quickly in Harrisonburg and Rockingham County. We jumped from 1,300 sales a year up to nearly 1,500 in 2020 and then even higher (1,669) in 2021. Thus far, 2022 is keeping pace with these two most recent very active years in our local market. 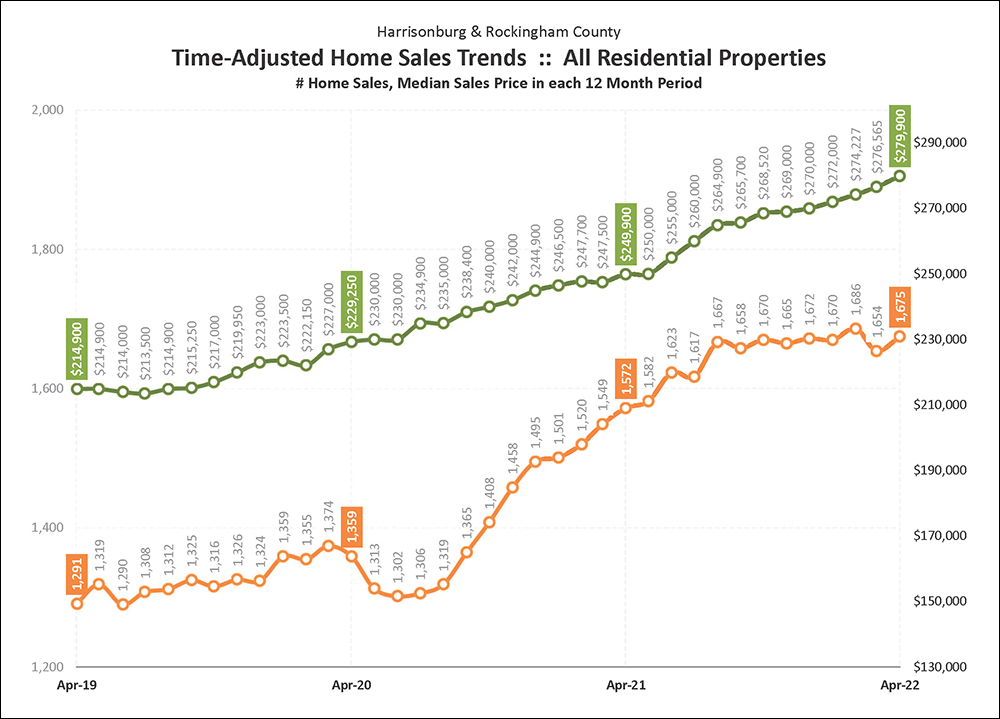 This graph shows a rolling 12 month trend line of the number of homes sold in the Harrisonburg and Rockingham County area, as well as the median price of the homes sold during these time frames. Each data point shows one year of home sales, which eliminates the volatility of evaluating sales figures on a monthly basis. The annual pace of home sales dropped off in late spring 2020 due to COVID but a few months later started rising rapidly, flying past 1,500 sales per year, then past 1,600, and was heading towards 1,700 sales per year until the recent drop in March 2022. The median sales price has been trending upwards for several years now. 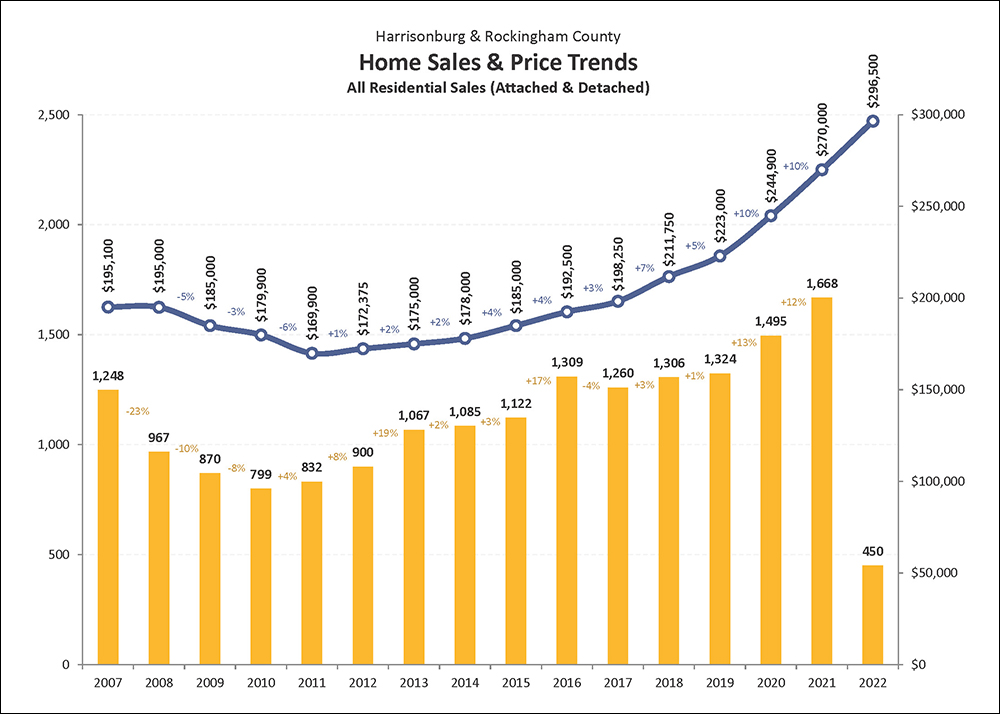 This graph provides an overall indicator of the state of our housing market, showing both the number of homes being sold each year (yellow bars) as well as changes in the median sales price during the same time period (blue line). Over the past 11 years we have seen relatively steady increases in the number of homes sold each year in Harrisonburg and Rockingham County - with a surprisingly large 13% increase in 2020 followed by another strong 12% increase in 2021. The median sales price has also been consistently increasing for ten years now, up to an all time high in 2021 of $270,000 thanks to 10% increase in 2020 and 2021. 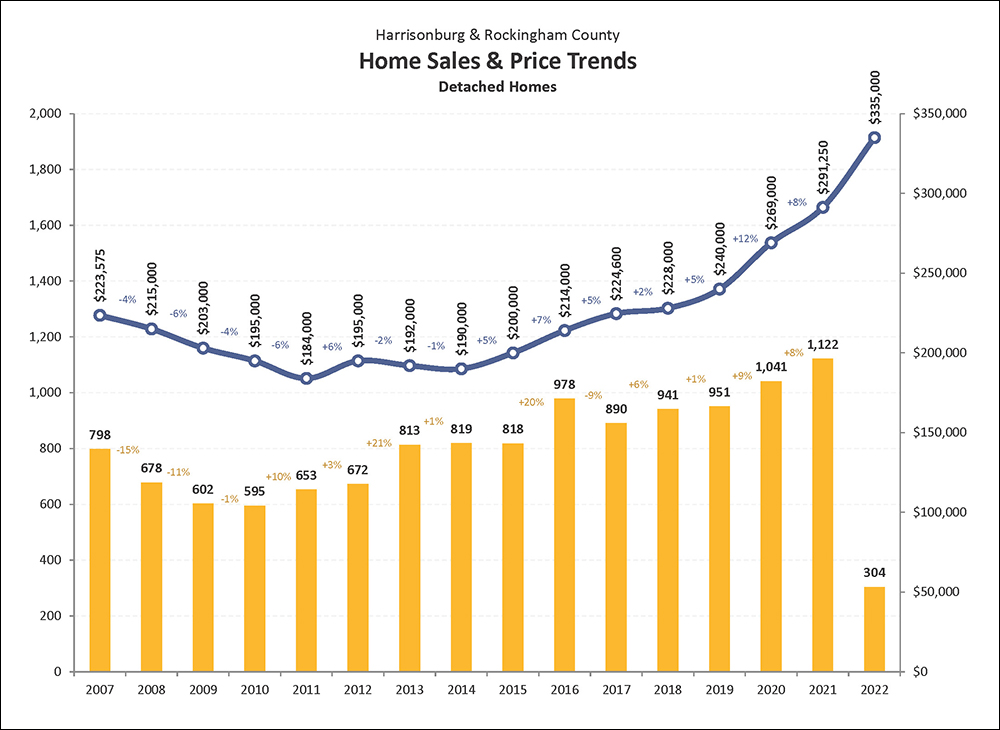 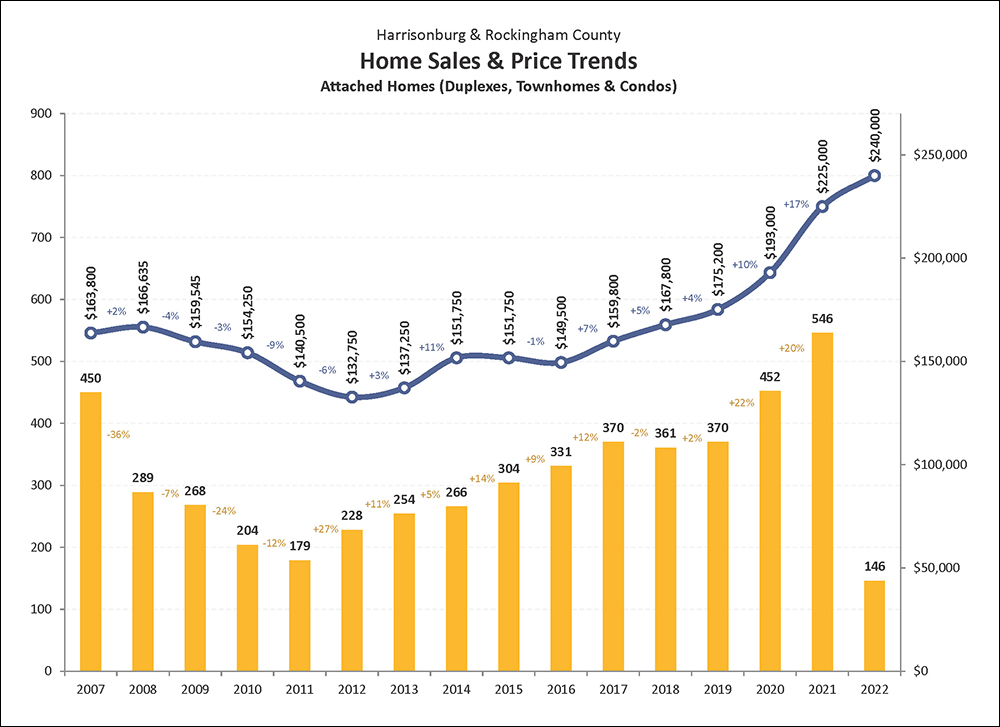 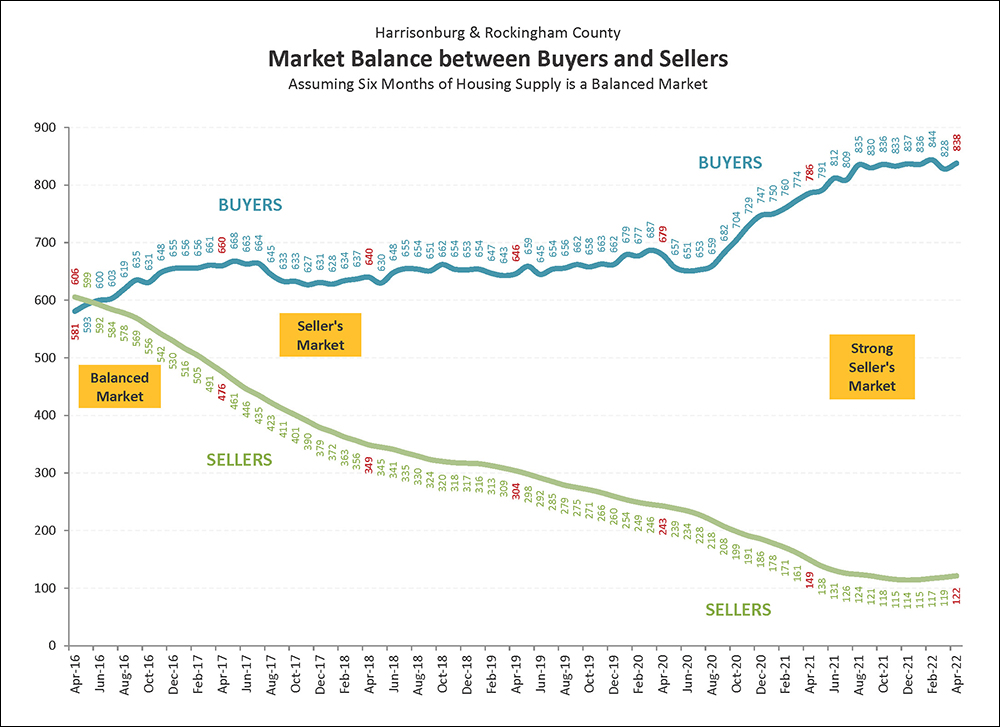 Historically, well before Covid, many had considered six months of inventory (active listings) to be an indicator of a balanced market between buyers and sellers, but many are reconsidering that metric now. The “BUYERS” trend line above shows how many buyers are buying in a six month period. The “SELLERS” trend line above shows how many sellers are in the market (active listings) at any given time. Over the past several years we have seen a steady increase in buyers and a declining number of sellers. We now see many (many!) more buyers buying in a six month period than there are homes for sale at any given time. 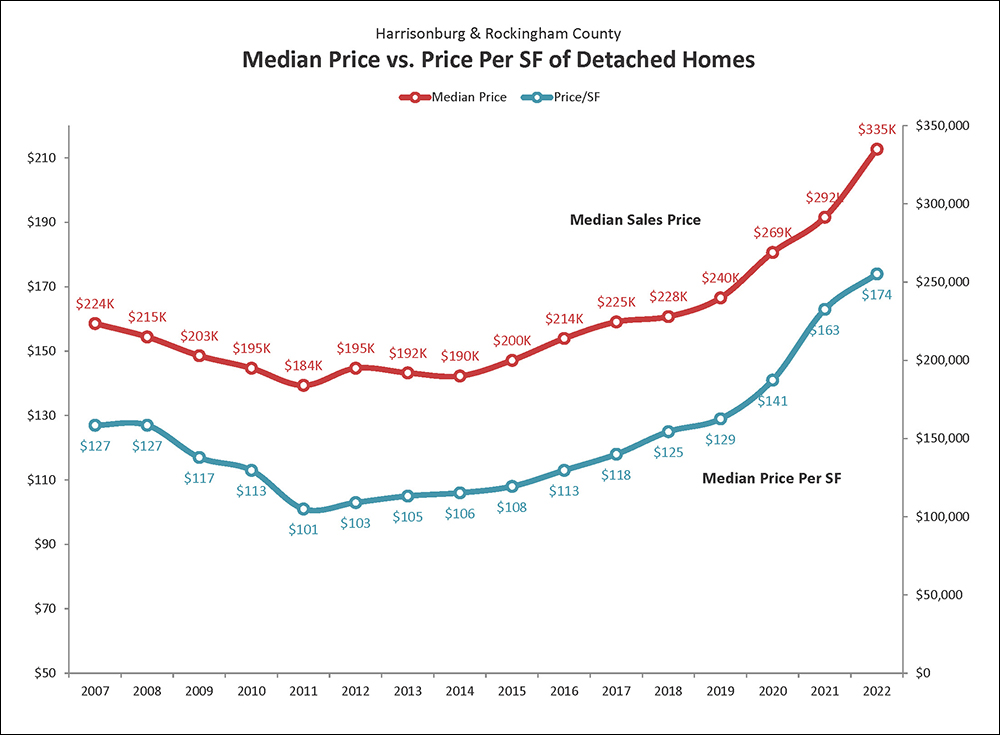 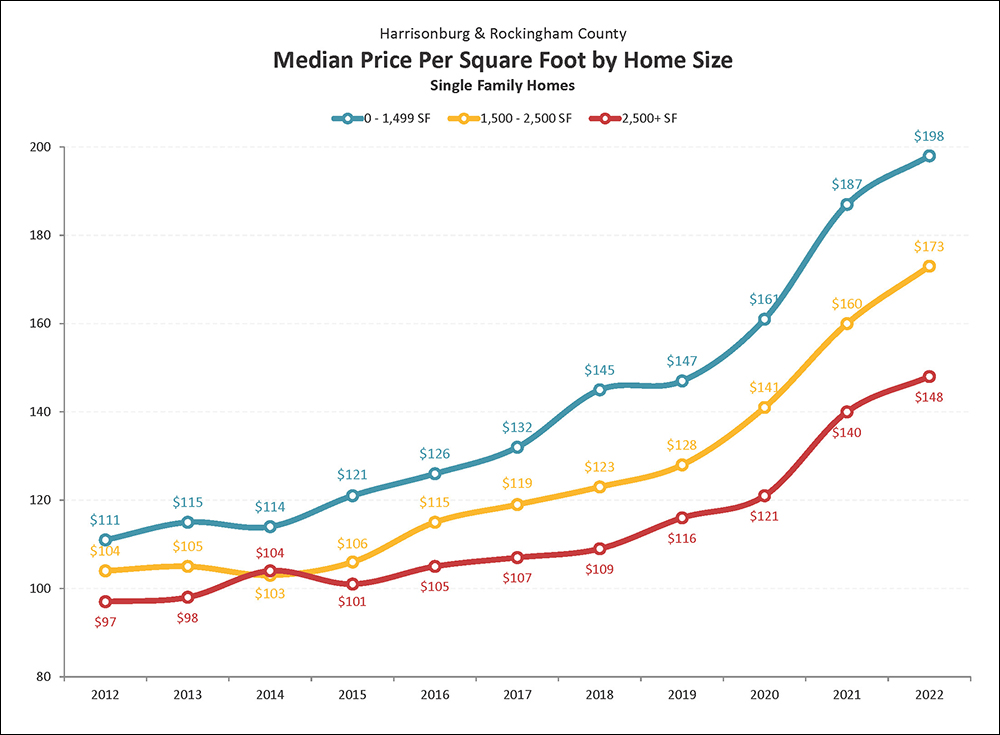 Price per square foot of single family homes certainly varies for many reasons, including the age, location, lot size and structural characteristics of each home sold. However, there are some similarities in homes of similar sizes. Looking at 2020 figures, this graph illustrates that the median price per square foot of larger homes (2500+ SF) was a good bit lower than that of homes with less than 1500 SF during nearly every year. These values cannot be used as an absolute standard against which the value of any home can be measured, but they can provide some helpful guidance when trying to determine the value of a home. 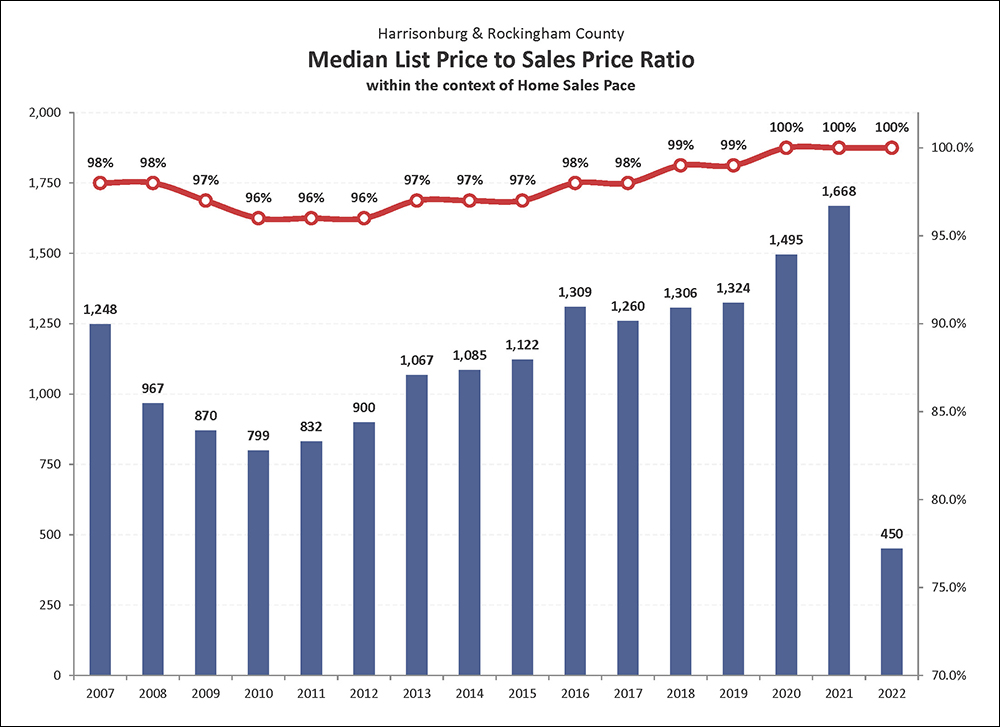 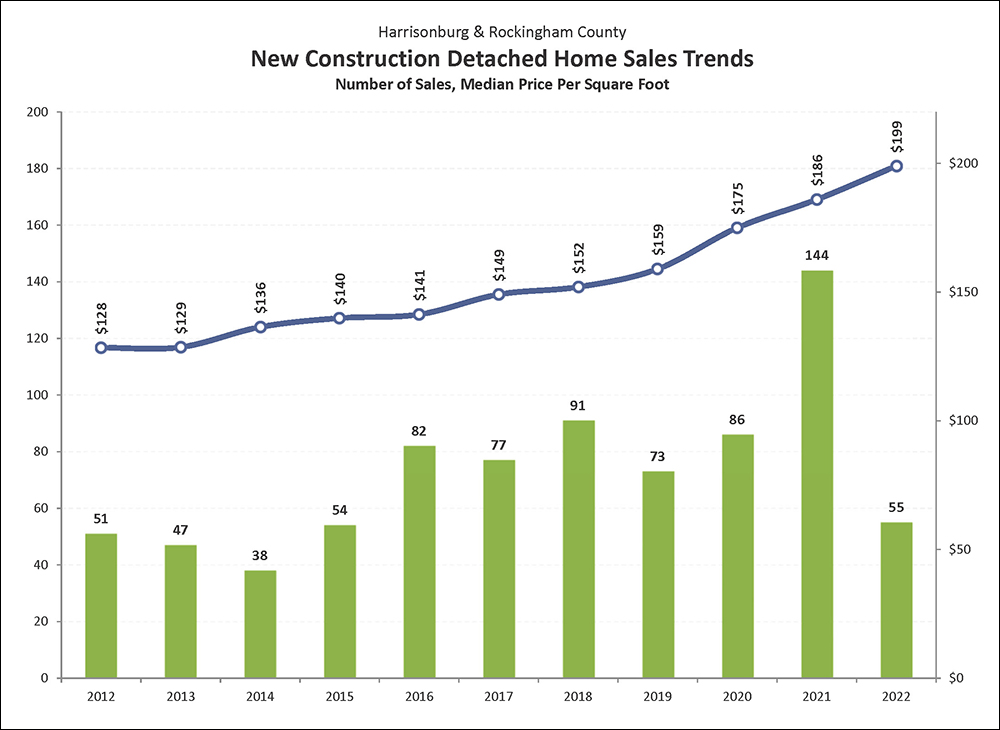 New home builders built a record number of new homes in Harrisonburg and Rockingham County last year -- 144 -- approaching twice the number built per year in many of the past five to ten years. These figures, of course, only represent new homes being marketed through the MLS. Plenty of additional new homes are built by local home builders on lots already owned by the person who will live in the home - and thus they do not show up in the MLS. These new home sales show a steady increase in the price per square foot of homes being built and sold over the past ten years, with the largest increase in that value taking place in 2020. 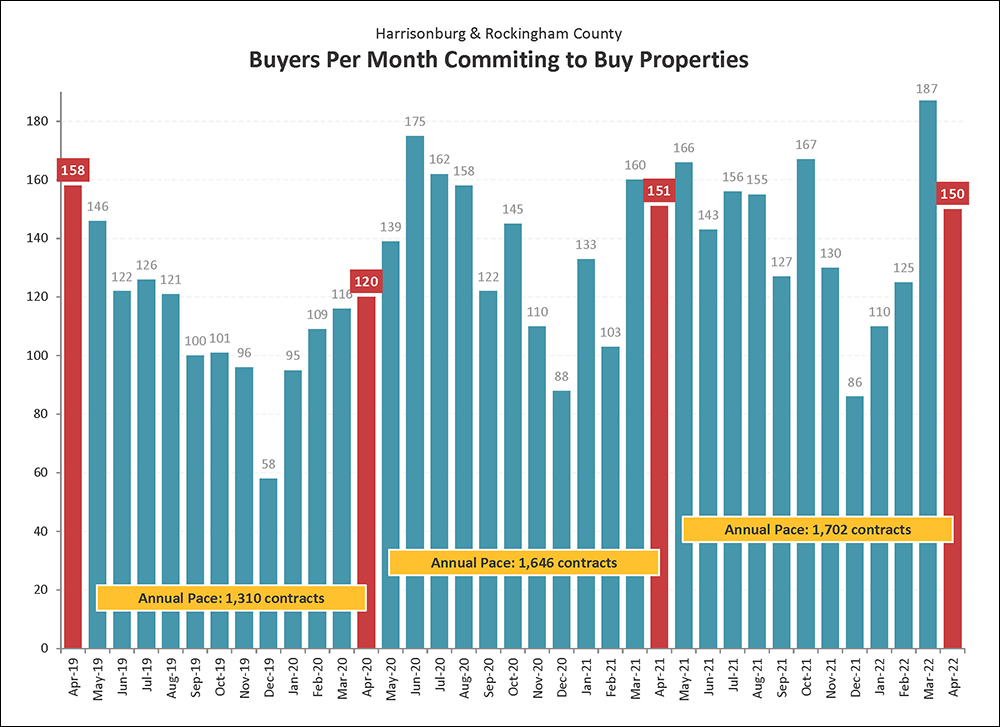 Contract activity, buyers and sellers signing contracts to buy and sell homes, are the leading indicator of what we will see in future months of closed sales transactions. Interest rates have been on the rise for several months now so many assumed we would start to see a decline in buyer activity. If we are going to see a slow down in buyers buying houses it does not seem to be happening yet. Roughly the same number of buyers contracted to buy homes this April (150) as did in the same month last year (151) in Harrisonburg and Rockingham County. The market does not yet shown any signs of slowing down. 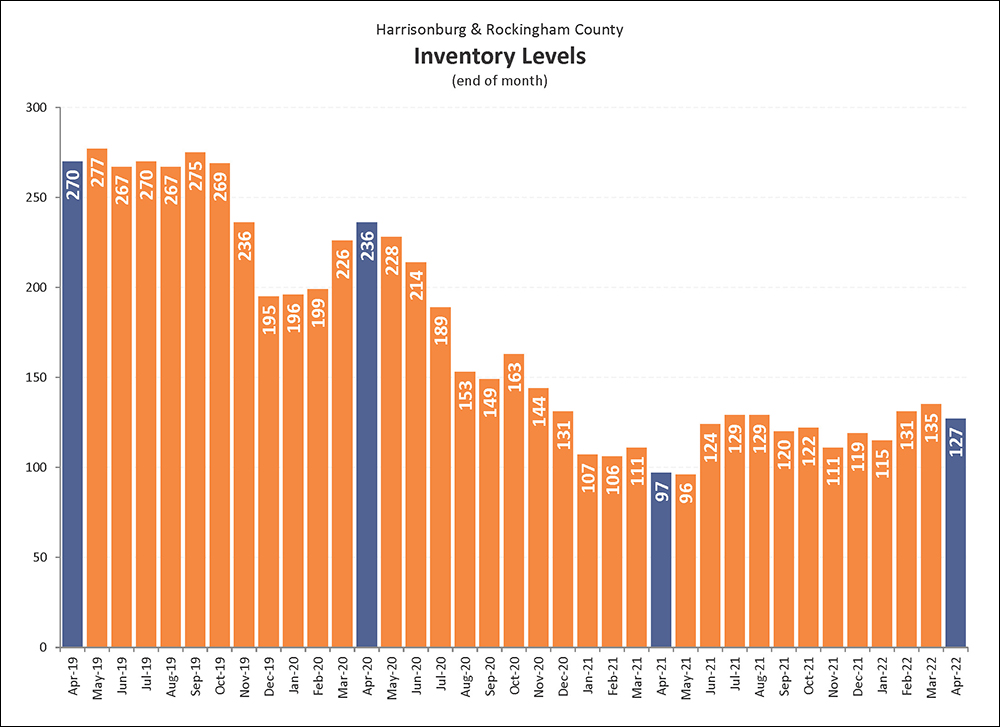 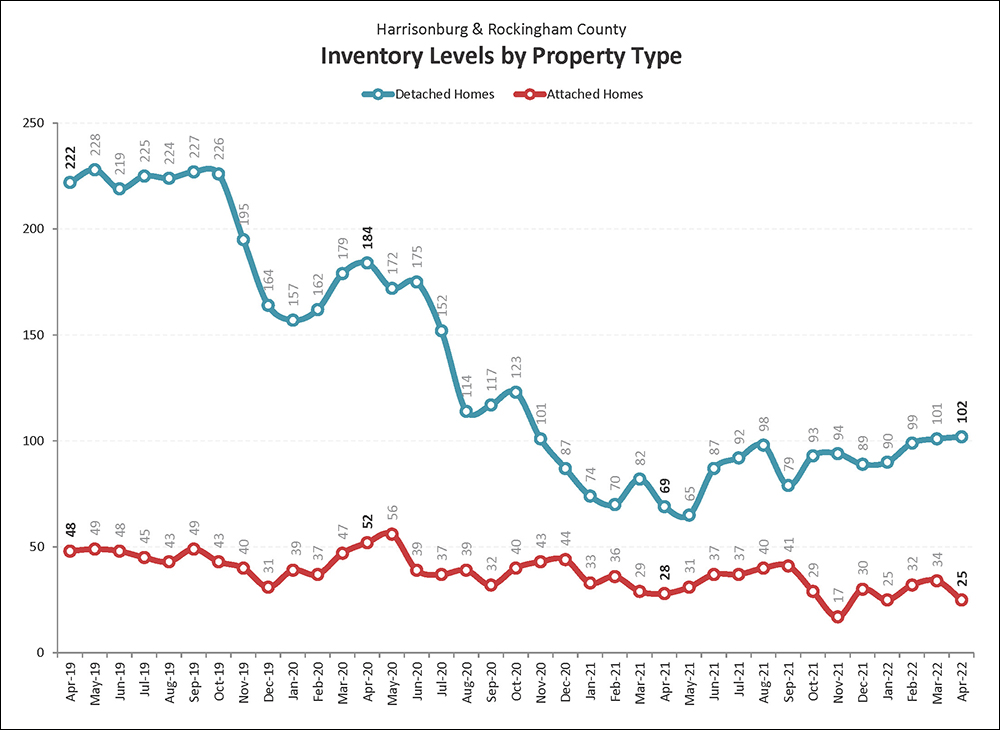 This graph examines the differences in inventory levels over time when examining only single family homes as compared to attached dwellings (townhouses, duplexes, condos). The number of detached homes for sale has declined steadily over the past two years with a 44% drop and the number of attached homes (townhouses, duplexes and condos) for sale has also significantly declined with a 52% drop over the past two years. Normal seasonal changes in inventory levels (more homes on the market in the spring) do not seem to be holding true at this point. 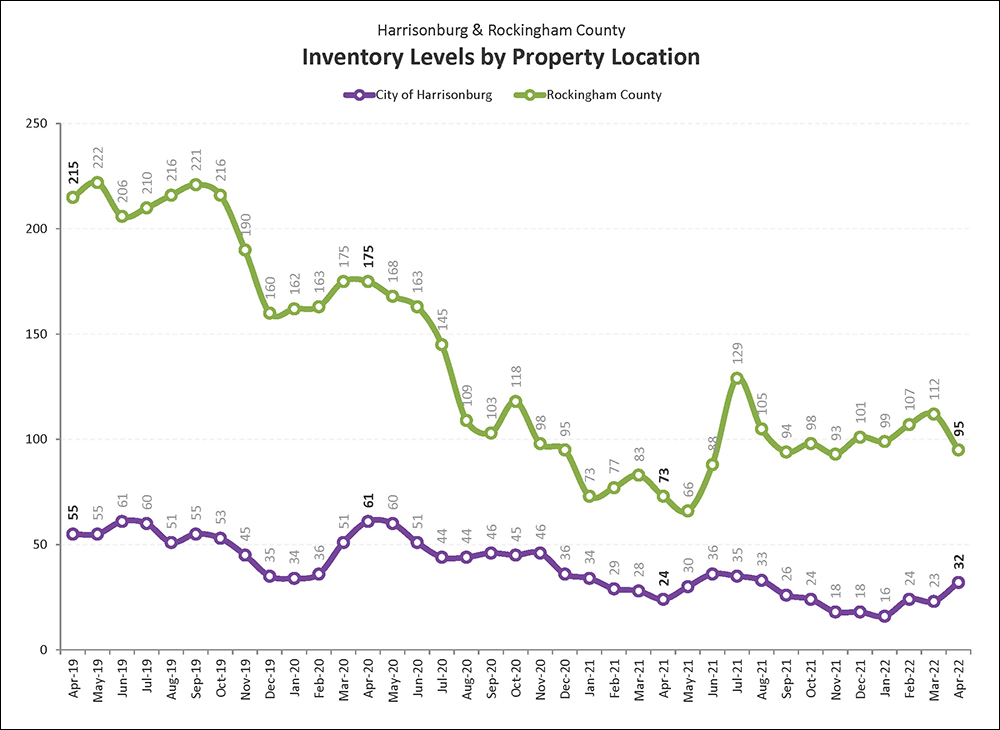 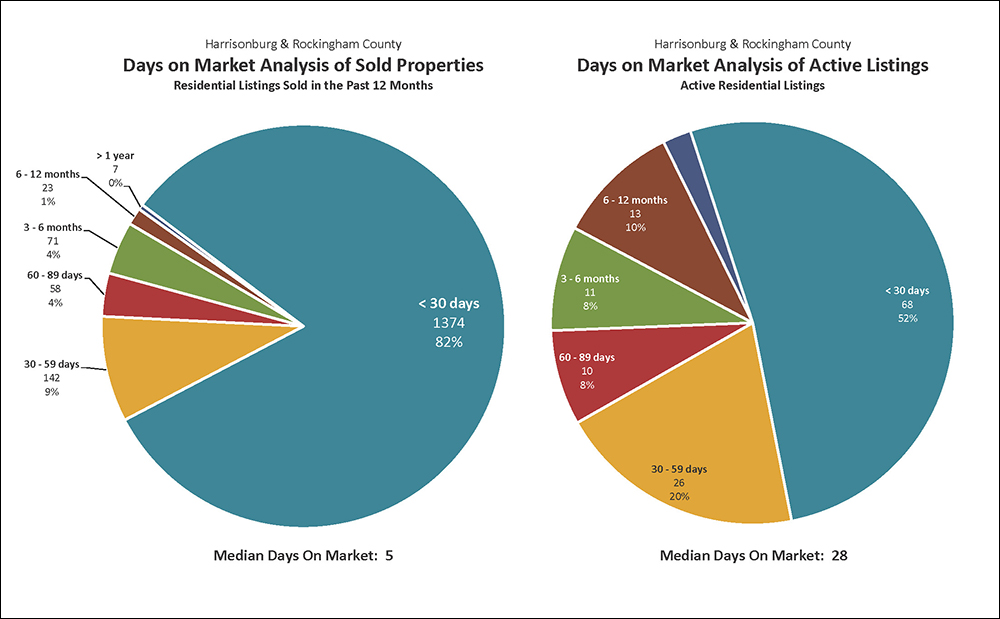 Declining inventory levels are contributing to an overall decline in the time it takes to sell a home in Harrisonburg and Rockingham County. The current median “Days on Market” is 5 days for homes that have sold in the past year. Remarkably, 82% of homes that have sold in the past year have gone under contract within 30 days of having hit the market. Combine that with those that went under contract during the second month on the market, and you’ll find that 91% of homes that sell go under contract within 60 days. The graph to the right, above, shows the length of time that each active listing has been on the market for sale. 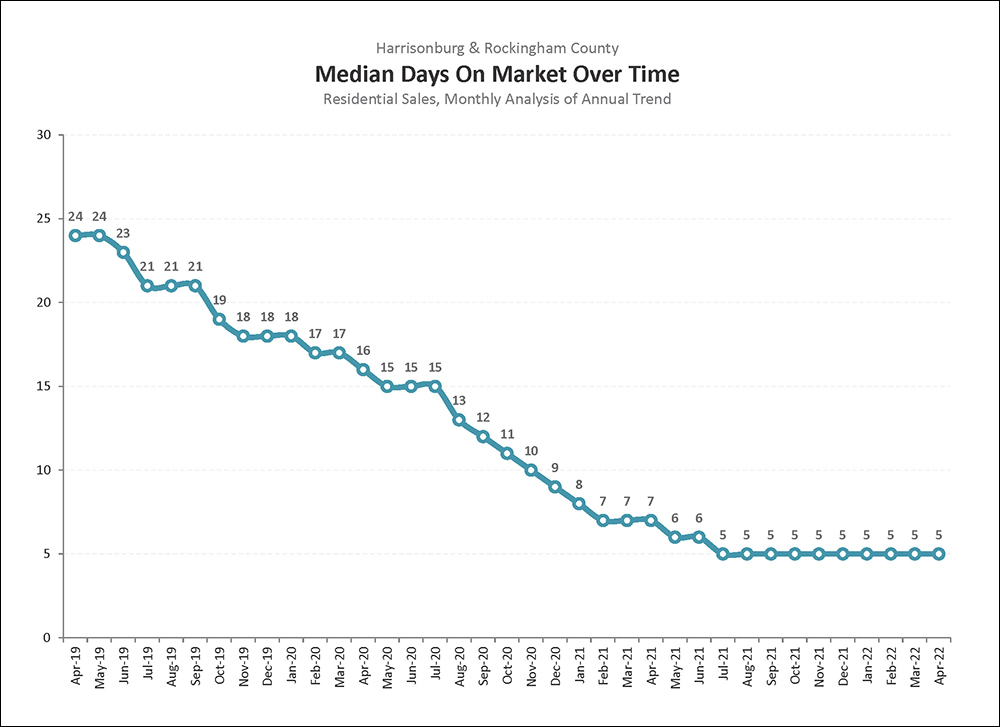 Days on market -- how quickly homes are going under contract -- can be an excellent indication of the mood of the local housing market. Independent of how many homes are selling and the prices at which they are selling -- if they are going under contract quickly then the market is strong and power is tipped towards sellers -- and if homes are taking a longer time to go under contract the market is not quite as strong and power is starting to balance out between sellers and buyers. Over the past three years we have seen a steady decline in how long it takes homes to go under contract, with a current median of five days on the market. 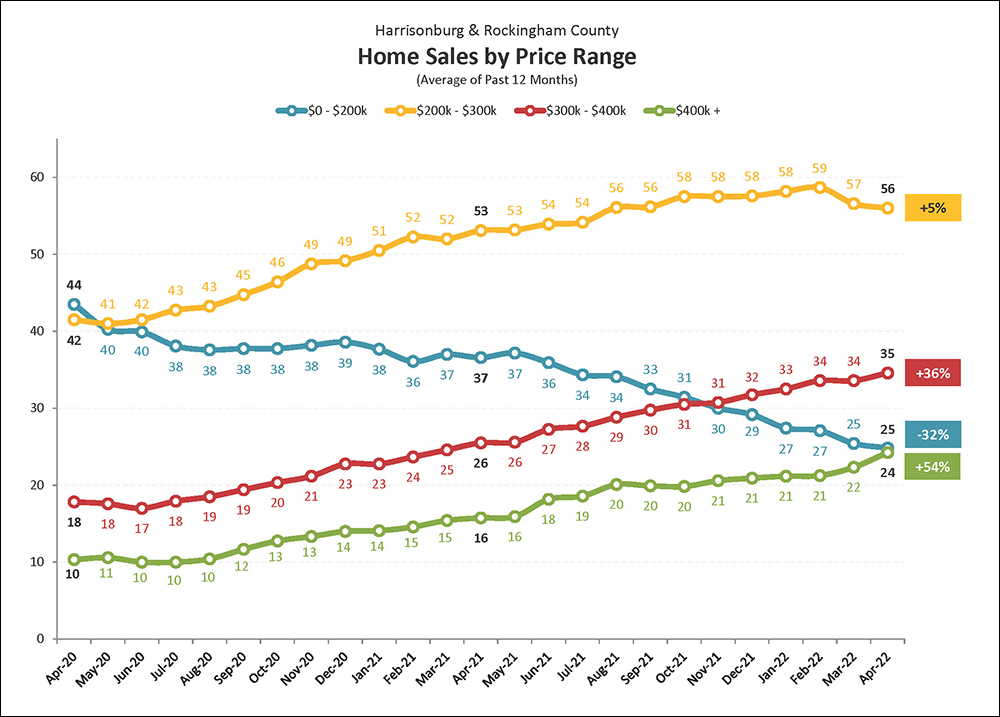 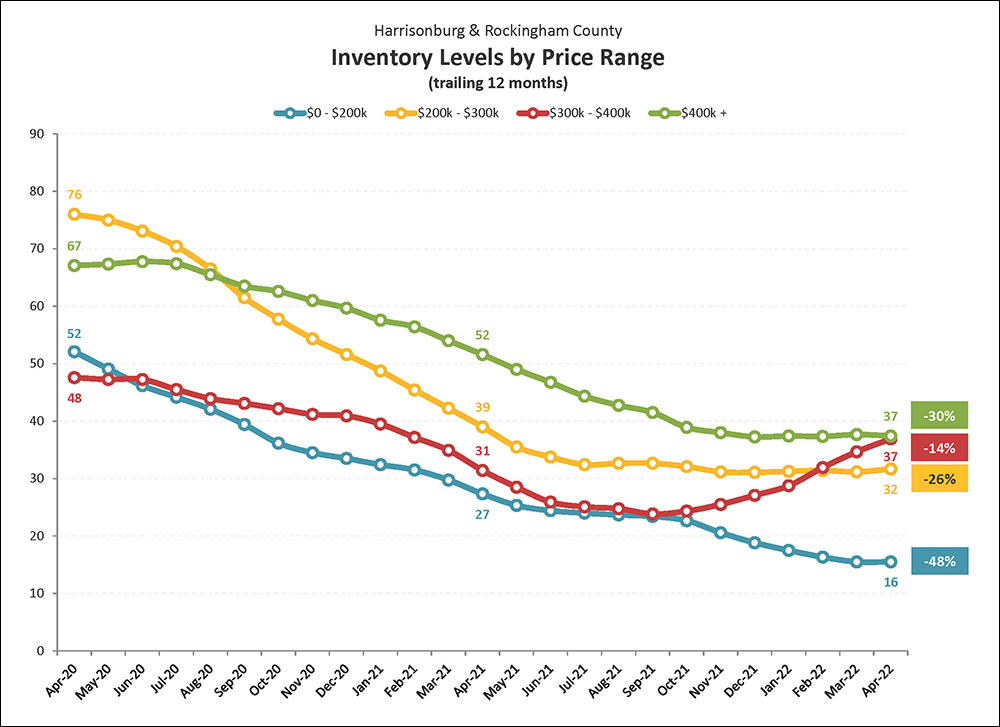 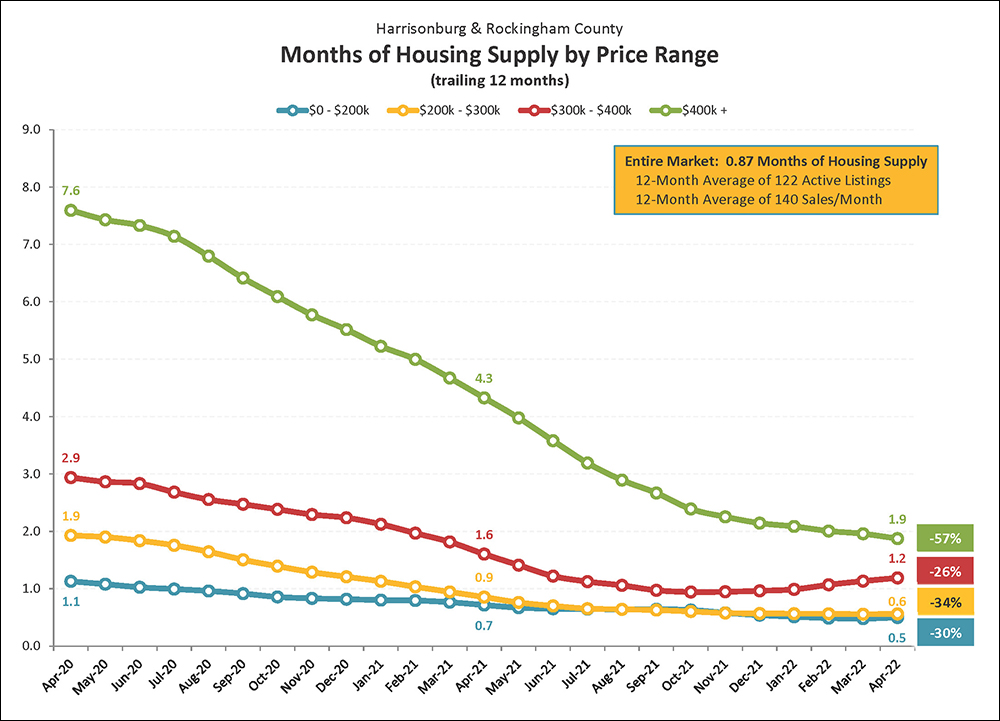 With so many home sales (lots of buyers) and so few homes on the market (not so many sellers), there are low levels of supply in most price ranges in our local real estate market. The graph above illustrates that while it would take about two months to sell all of the homes currently for sale over $400K if the same number of buyers bought each month as have been buying (on average) over the past 12 months and if no new listings came on the market -- but it would take a month or less (!!!) to go through the inventory under $400K. Many consider a six month supply to be a balance between buyers and sellers. 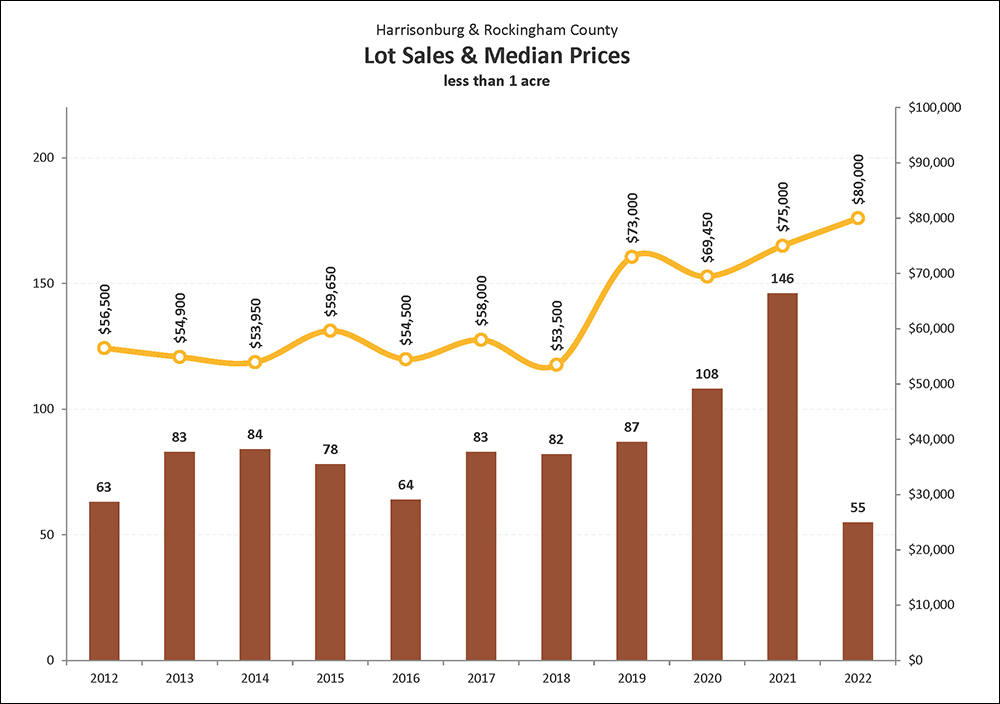 For six of the seven years between 2013 and 2019 we saw right around 80 sales per year of lots of less than an acre in Harrisonburg and Rockingham County. In 2020, that annual pace of sales increased a good bit to 108 sales of building lots. Despite that increase in the number of lot sales, the median sales price for those lots declined slightly to $69,450. That decline is likely a result of which particular lots sold, not necessarily an indication that all lots are selling at lower prices now than they were a year ago. We then saw 146 lot sales in 2021, which means last year was the strongest year of lot sales in the past decade. 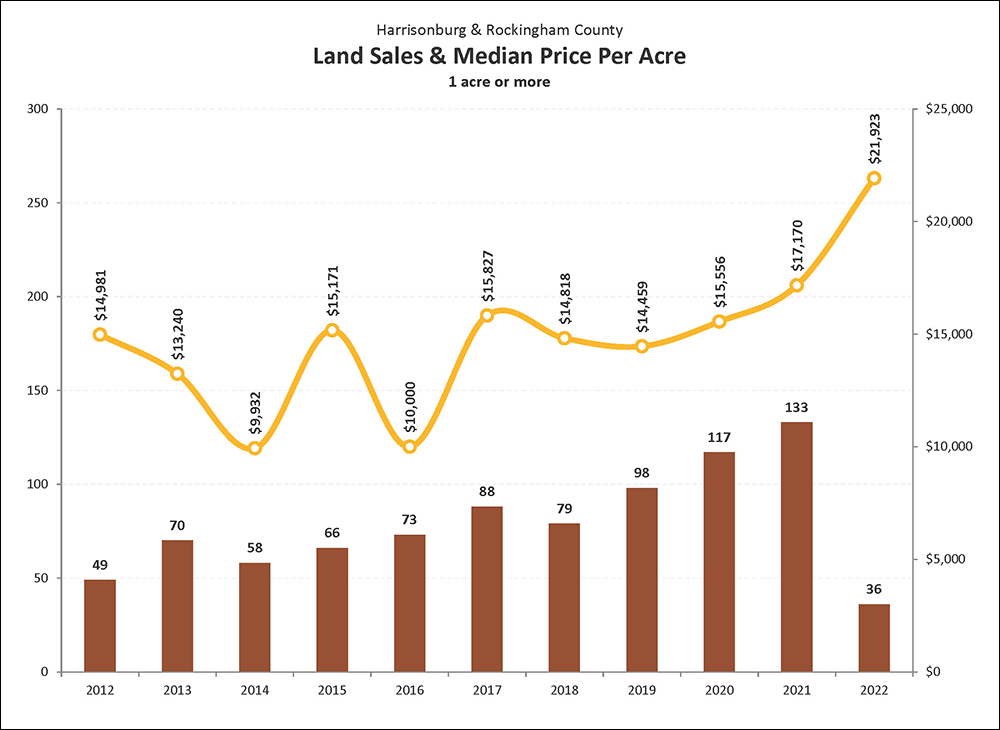 The pace of sales of parcels of land larger than one acre in Harrisonburg or Rockingham County has increased over the past ten years to 133 land sales in 2021-- marking the highest year of sales in over 15 years. The median price per acre had remained right around $15,000 per acre for four years between 2017 and 2020 but increased to just over $17,000 in 2021. Of note -- some aspects of this “median price per acre” calculation are affected by which parcels actually sell in a given year. The increase in buyer demand over the past 10 years has not seemed to have created any significant upward lifting pressure on values to date. 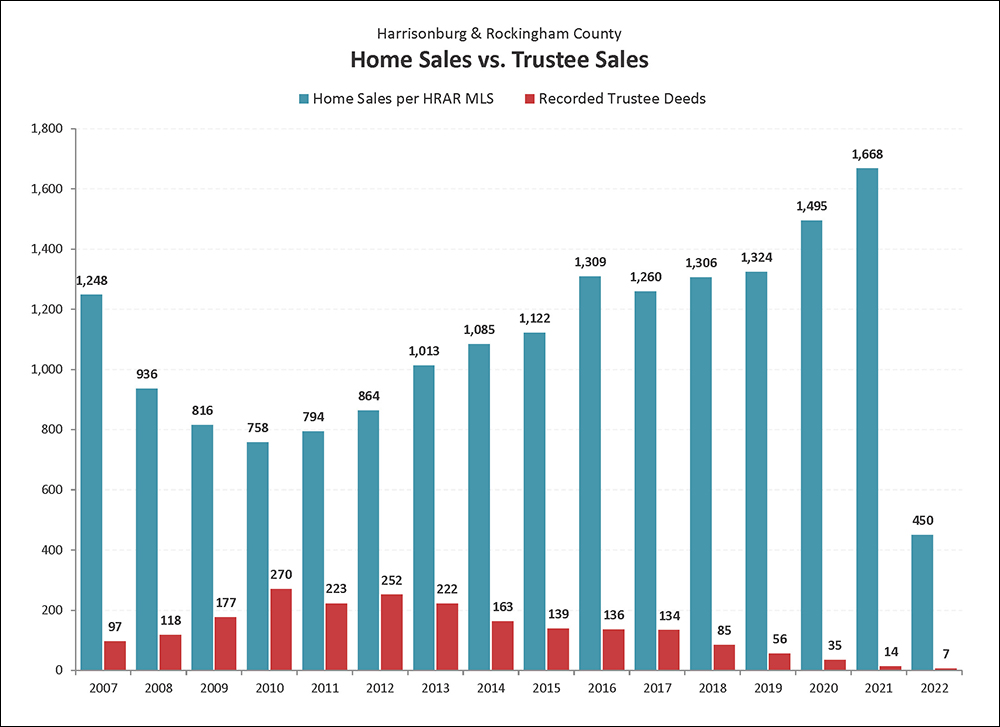 The graph above is a comparison of two imprecise measures -- but the comparison can still be helpful. The blue bars show the number of home sales recorded in the HRAR MLS -- this does not include private sales that did not involve a Realtor, nor new home sales directly from a builder. The red bars show the number of recorded Trustee Deeds. Some foreclosed properties then show up again as REO properties. The foreclosure rate in our local market area has been trending downward over the past nine years and is now at the lowest level seen anytime in the past 15 years! The moratorium on foreclosures likely kept that figure low in 2020 and 2021. 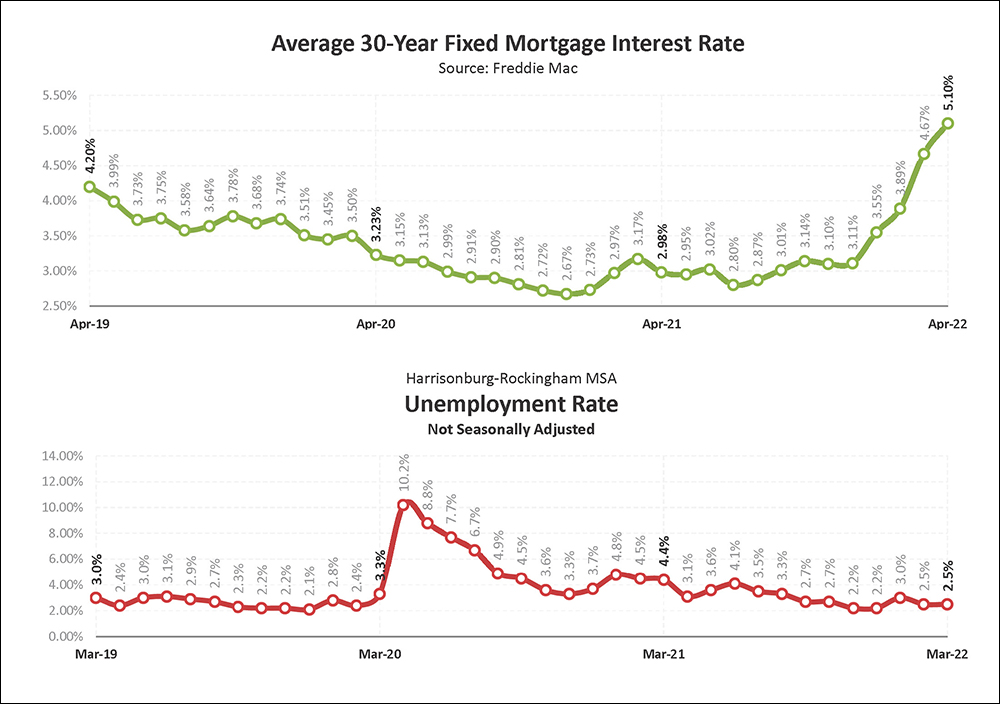 As shown in the top graph, over the past several years mortgage interest rates steadily declined to a historic low rate of 2.67% in December 2020 before climbing throughout 2021, but not much above 3%. In 2022, however, mortgage rates have been climbing much more quickly, crossing the 5% threshhold at the end of April. The second graph illustrates trends in the local unemployment rate, which has now returned to the typical 2% - 3% range after having peaked at 10.2% during the start of the COVID-19 pandemic. Low local unemployment rates and low mortgage interest rates help our local housing market remain stable. 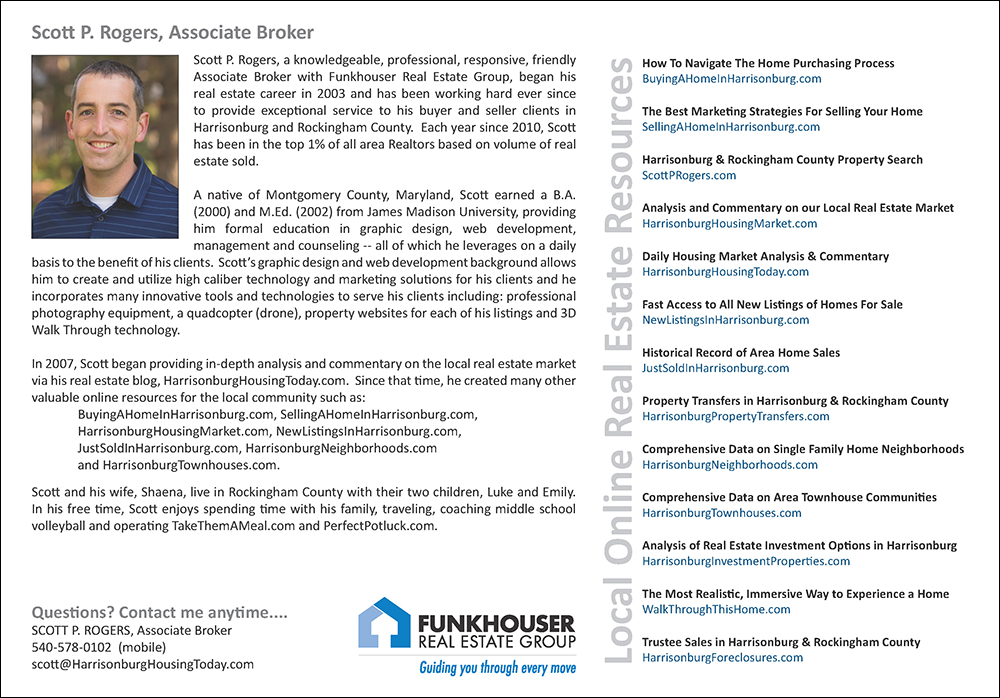